Residents of the slum in Ahmedabad said they have lived there for over a decade but were served the notice amid preparations for Donald Trump's visit. 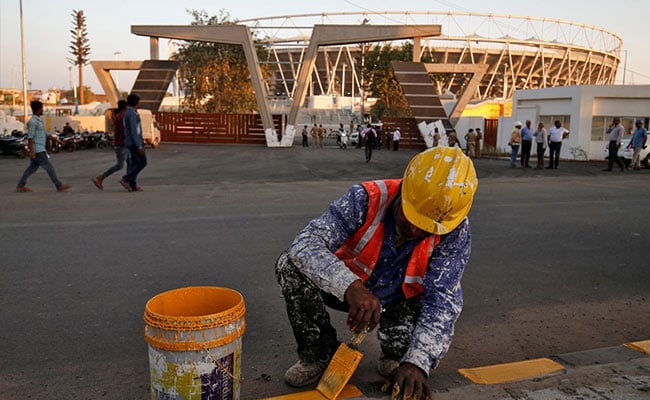 Donald Trump will inaugurate the Motera stadium in Ahemdabad.

At least 45 families living in a slum near the newly-built Motera stadium in Ahmedabad have been served eviction notices ahead of US President Donald Trump's visit on February 24. Ahmedabad Municipal Corporation officials have denied any connection with the high-profile visit, but the slum residents have questioned the timing.

The eviction notices come even as the civic body builds a 400-metre wall allegedly to block the view of a slum along a route the US President may take during his visit to Prime Minister Narendra Modi's home-state.

According to the Press Trust of India, the eviction notices read: "You have encroached upon a plot of land belonging to the AMC. Evict the plot in another seven days with your household chattels, otherwise, a departmental action will be taken to evict the land. If you have to make any representation, you can do so on February 19 at 3 pm."

The slum is located along a road connecting Ahmedabad to Gandhinagar, around one-and-a-half km away from the Motera stadium.

A slum-dweller, Shailesh Bilwa, claimed on Tuesday that officials of the AMC had visited them several times in the last seven days. "We have been living here for over a decade. We had never been served any eviction notice in the past. Why now," questioned Dinesh Adravani, a daily-wage labourer who said he had been asked to vacate the slum by tonight.

He said slum-dwellers like him had no alternative shelter if they were forced out. "We are ready to vacate, but we need an alternative accommodation, otherwise we will be forced to live on pavements. We live here with our family members comprising women and children. We pray to the government to provide us with an alternative plot where we can live," said Shailesh Bilwa.

He claimed that officials of the AMC had been asking them to vacate the plot for the last seven days. "Some of them even threatened to use force against us," he alleged.

Deputy Estate Officer (West Zone), AMC, Chaitanya Shah said the eviction notice had nothing to do with the scheduled "Namaste Trump" programme at the stadium.

"They (slum-dwellers) have been served the eviction notice under the provisions of the Town Planning Act and it has nothing to do with Trump's visit. The plot belongs to the AMC. The notice was served as the site survey conducted in January found that the plot had been encroached upon," Mr Shah said.

PM Modi and Mr Trump are scheduled to address over one lakh people at the Sardar Patel Stadium in Motera on February 24, as part of the "Namaste Trump" event on the lines of the "Howdy Modi" event in Houston last year. Mr Trump is scheduled to take out a roadshow in Ahmedabad and visit Mahatma Gandhi's Sabarmati Ashram on that day.

Reuters reported that around Rs 30 crore has been spent on widening roads and improving infrastructure around the new stadium. With capacity for 1.1 lakh spectators, the Motera Stadium is expected to dislodge the Melbourne Cricket Ground as the world's largest, "Eighteen roads of about 20 kilometers in length from Ahmedabad Airport to Motera Stadium have been widened or re-laid," said Ahmedabad Municipal Commissioner Vijay Nehra, adding that the improvements had been planned before Mr Trump's visit was confirmed.