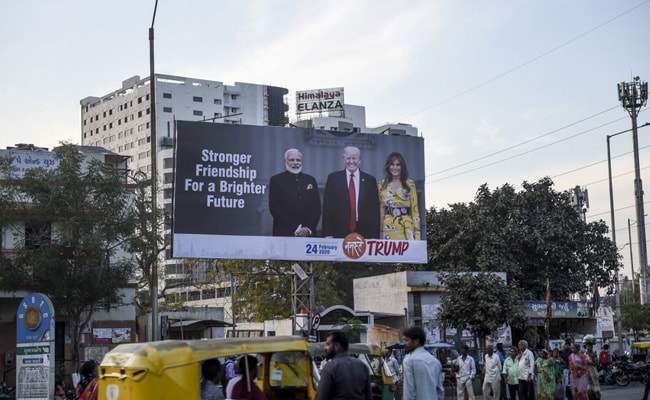 Donald Trump and Melania Trump will travel to Ahmedabad, Agra and New Delhi on February 24 and 25.

US President Donald Trump made another claim today, saying he has been told by Prime Minister Narendra Modi that 10 million people are expected to turn up along a 22-km-long road in Ahmedabad when he lands in India next week. Mr Trump's latest claim comes despite the Ahmedabad municipal body estimating much lower figures of the crowd.

PM Modi and President Trump will travel on a 22-km-long road on February 24.

"Prime Minister Modi said we will have 10 million people to greet you. Here's my problem, we have a packed house. We have a lot of people, thousands of people who couldn't get in. It's going to look like peanuts from now on. I'll never be satisfied with the crowd if we have 10 million in India," the US President said at the rally in the US.

Ahmedabad Municipal Commissioner, however, had said on Thursday that around one lakh people are expected to be lining up to greet the American President.

Earlier this week, Donald Trump had put the number at seven million. "We're not treated very well by India, but I happen to like Prime Minister Modi a lot. And he told me we'll have 7 million (70 lakh) people between the airport and the event," Mr Trump had said at a press conference.

To put the number in perspective, the population of Ahmedabad, the biggest city in Gujarat, is 70 to 80 lakh.

"I'm going to India next week, and we''re talking about, you know, they have 1.5 billion people. And Prime Minister Modi is number two on Facebook, number two. Think of that. You know who number one is? Trump. You believe that? Number one. I just found out," Mr Trump said during his commencement address at the Hope for Prisoners Graduation Ceremony in Las Vegas.

Donald Trump, accompanied by First Lady Melania Trump, is scheduled to travel to Ahmedabad, Agra and New Delhi on February 24 and 25. In Ahmedabad, President Trump will address the ''Namaste Trump'' event jointly with PM Modi at the newly-built Sardar Vallabhbhai Patel cricket stadium in Motera, the world's largest cricket stadium.

Ahead of the VVIP visit, there have been talks about India and the United States agreeing on a trade package as a precursor to a major trade deal. A big-ticket signing, however, is unlikely, according to reports.

"We're going to India, and we may make a tremendous deal there," Mr Trump said in Las Vegas. "Well, we can have a trade deal with India, but I'm really saving the big deal for later on," he told reporters on Tuesday.