The Congress said that the only gainers from Donald Trump's visit are arms manufacturers. 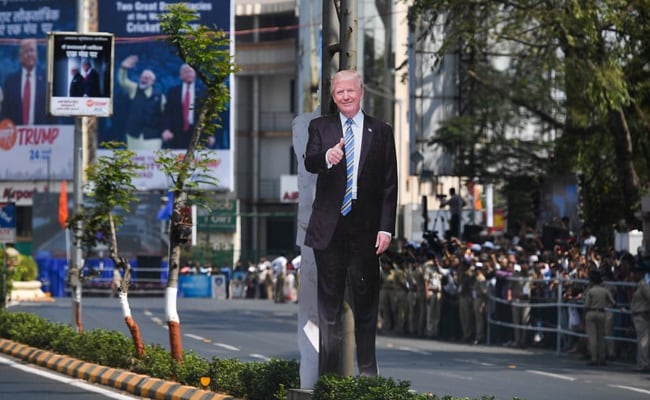 Donald Trump and Melania Trump were welcomed by PM Modi in Ahmedabad.

Raising the pitch on the visit of US President Donald Trump, the Congress today alleged that India has been reduced to a lowly buyer from America, rather than being a strategic partner.

"India has been reduced to a lowly buyer state from a strategic Partner. India has no role in Afghan Peace Process," said former Union Minister Manish Tewari.

The Congress said that the only gainers from Donald Trump's visit are arms manufacturers.

1/2 Only gainers of @realDonaldTrump 36 hour Tamasha commencing at noon today are going to be Boeing's,Lockheed Martin's,General Atomics & other merchants of death.India has been reduced to a lowly buyer state from a strategic Partner.India has no role in Afghan Peace Process,US.

"Only gainers of Trump 36-hour Tamasha commencing at noon today are going to be Boeing's, Lockheed Martin's, General Atomics and other merchants of death," Mr Tewari tweeted.

The Congress said that in three years as US President, Donald Trump has gutted the Global Multilateral order, walked out of Trans Pacific Partnership (TPP), virtually torpedoed NATO, insulted America's closest allies, unleashed suppressed bigoted and racist tendencies in US. He prefers deals over vision.

Further commenting on India-US relations, Mr Tewari said, "Pak Special Relationship is back on track. Quad China except for an airy fairy Blue Dot network there is nothing to counter BRI in substantive terms. US-Iran Tensions hurt Indian Oil Refineries the most. Quad is a complete non-starter. India falls in between the cracks of.."

In another tweet, Manish Tewari said, "1/4 Cent-Com qua Paf-Com. Visit is a fluff. A Specticalization of Diplomacy designed to detract from the fact that the NDA/BJP Govt has failed to secure India's interest and the last big Idea in the relationship was in 2005 - India-US Nuclear Deal that smashed Nuclear apartheid.