"Could Be": Trump Hints At Announcement At PM's "Howdy, Modi" Event

PM Modi will be visiting the US from September 21-27 for the annual session of the United Nations General Assembly. It is his first US trip after winning a second term as prime minister in May. 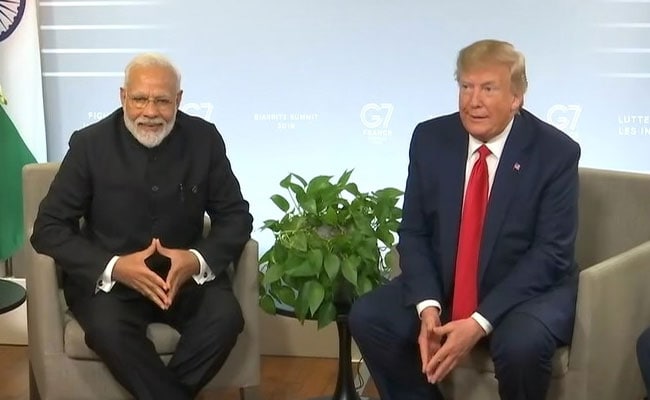 US President Donald Trump has hinted that there "could be" some announcement by him at the mega "Howdy, Modi!" event in Houston on Sunday, where he would join Prime Minister Narendra Modi in addressing the 50,000-strong Indian diaspora.

The White House on Monday announced that the US President would join PM Modi at the mega Houston rally on September 22 as a "special gesture" by the US President to underscore the special bond between the two countries.

It is for the first time that Trump and Modi would share a stage together. The event is the third meeting between the two leaders in three months, after the G-20 summit in Japan in June and the G-7 summit in France last month.

"Could be. I have a very good relationship with Prime Minister Modi," Donald Trump told reporters on Wednesday aboard Air Force One on his way back from California to Washington DC. He did not elaborate. He was responding to a question if there would be any announcement when he goes to Houston for the rally with PM Modi.

According to media reports, officials of the two countries are trying to finalise a trade deal before Prime Minister Modi and Trump meet in Houston.

Trade tensions between India and the US have been rising with Trump complaining that tariffs imposed by New Delhi on American products were "no longer acceptable".

The US in June terminated India''s designation as beneficiary developing country under the Generalised System of Preferences (GSP) programme.

India imposed retaliatory tariffs on 28 US products including almonds and apples from June 5, after the Trump administration revoked its preferential trade privileges.

Reacting to a record number of 50,000 Indian-Americans registering for the event, Trump said the crowd for the event has now become bigger after it was announced that he would be going there.

After the Houston event, Donald Trump would travel to Ohio for an event with the visiting Australian Prime Minister.

PM Modi will be visiting the US from September 21-27 for the annual session of the United Nations General Assembly (UNGA). It is his first US trip after winning a second term as prime minister in May.

The two leaders are again scheduled to meet later in the week in New York on the sidelines of the UN General Assembly (UNGA) session.