The BJP has approached the election commission, complaining that documents submitted by Congress candidate Naranbhai Rathwa for the Rajya Sabha elections from Gujarat were allegedly forged and obtained beyond the 3 pm deadline on Monday, the last day for filing of nominations. 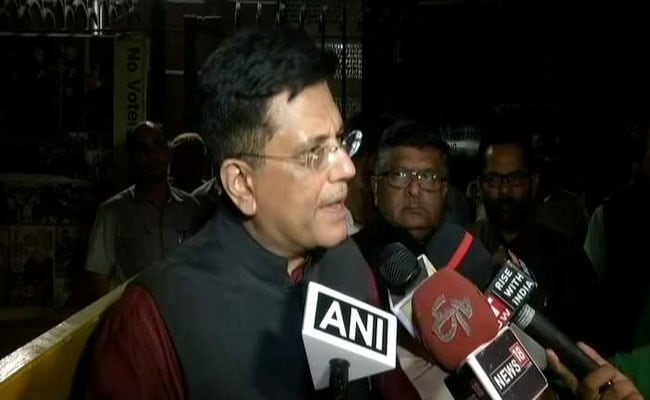 New Delhi: Just hours after the returning officer for the Rajya Sabha elections in Gujarat found the nomination papers of Congress candidate Naranbhai Rathwa valid, the BJP approached the election commission and the Lok Sabha Speaker, questioning the authenticity of the no dues certificate obtained by Mr Rathwa, a former Lok Sabha member.

A BJP delegation led by union minister Ravi Shankar Prasad filed a complaint with the election commission, claiming that the documents submitted by Mr Rathwa was allegedly forged and obtained beyond the 3 pm deadline on Monday, the last day for filing of nominations.

According to rules, a former lawmaker contesting elections needs to submit a certificate that they don't have any outstanding dues relating to their earlier stints as parliamentarians, while filing their nomination papers.

"The Lok Sabha secretariat has certified that the no dues certificate was issued around 3.30 pm on March 12. We fail to understand how he could have submitted the certificate before 3 pm. We have also lodged a complaint with the Lok Sabha Speaker. Taking note of our complaint, the Speaker has ordered a probe by the secretary general," union minister Piyush Goyal told reporters.

In its letter to the Lok Sabha Speaker, the BJP says the "entire process of getting seven no dues certificates from seven departments of the Lok Sabha secretariat was completed in less than 40 to 50 minutes".

The BJP has also questioned the nomination papers filed by Independent candidate supported by the Congress -- former IAS officer and senior scheduled caste leader P K Valera -- calling the affidavits filed by him as "defective". The Congress has propped up Mr Valera as there are doubts over whether its nominee Naranbhai Rathwa's papers will hold up to scrutiny.

There are six candidates for four Rajya Sabha seats in Gujarat making it a contest on March 23, when voting will take place. The BJP and Congress have fielded two candidates each and are supporting an Independent candidate apiece.

Both parties have enough votes to win two seats each. The move to back a third candidate is an attempt by the BJP to transfer surplus votes to the Independent candidate it is supporting, hoping that  some Congress MLAs, disgruntled with the party's choice for one of the Rajya Sabha seats, will cross-vote.

The Gujarat assembly has 182 members -- the BJP has 99 and the Congress has 77. A candidate needs 38 votes to win. So while the BJP can ensure that two of its candidates sail through, it will have a surplus of 23 votes. The Congress too has enough lawmakers for two seats but some cross vote, the party will be in trouble.

There was some drama on the last day for filing nominations when Mr Rathwa was informed that he has not attached to his papers a certificate from the parliament secretariat, mandatory for any former parliamentarian contesting the Rajya Sabha elections. Though Mr Rathwa has submitted an old certificate, the Congress fears that his form candidacy could be rejected.

The other candidate fielded by the Congress is party spokesperson Amee Yajnik, seen as a political novice. Congress sources indicated that there is resentment within the party over Ms Yajnik being fielded, and the BJP, sensing an opportunity, has backed Independent candidate Kiritsinh Rana, apart from fielding union ministers Purshottam Rupala and Mansukh Mandaviya. Ms Yajnik's chances, the BJP believes, could be marred by cross-voting by upset Congress lawmakers.

"We do feel that there is lot of resentment in the Congress against candidate selection and that's why we have filed an Independent candidate backed by us. There will be cross-voting," said Gujarat's Deputy Chief Minister, Nitin Patel.

The Congress has rubbished these claims. "Before any elections it's the BJP's strategy to spread falsehood. There is no chance of cross-voting," claimed Gujarat congress chief Bharatsinh Solanki.

Promoted
Listen to the latest songs, only on JioSaavn.com
Members of a state assembly elect Rajya Sabha members by what is called proportional representation with a single transferable vote. Each voter ranks his preference, and if the first candidate on the list has enough votes to win, or no chance of winning, the vote is transferred to the next choice and so on.

Rajya Sabha elections for three seats were held in Gujarat months before the assembly elections. At that time the BJP, with much more seats from the previous election, could easily win two but forced a contest for the third seat against senior Congress leader Ahmed Patel contested. Mr Patel just about scraped through and was re-elected.
Comments
Rajya Sabha electionsNaranbhai Rathwa