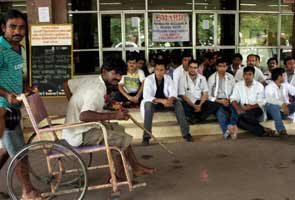 Mumbai: Medical services in Maharashtra were severely hit on Saturday as over 3,000 resident doctors in government hospitals across the state went on an indefinite strike to press for enhanced security at hospitals, even as talks with authorities proved unsuccessful, doctors said.

"We had two meetings today - one with the Mumbai's Municipal Commissioner Subodh Kumar and the other with the director of DMER (Directorate of Medical Education and Research) Dr P.S. Shingare. While the municipal commissioner has agreed to most of our demands, Shingare has asked for some time to look into the matter," said Pankaj Nalawade of Maharashtra Association of Resident Doctors (MARD) from KEM Hospital.

"We have scheduled a meeting with Shingare Sunday and are awaiting a positive outcome. Till then, we continue to strike work," Nalawade said.

The stir was triggered after a physically challenged doctor at the state-run Sion Hospital here was assaulted by a patient's kin.

Angered by the death of a 10-month-old baby girl, relatives assaulted the on-duty resident doctor, Vishnu Dhadwad, at the hospital Wednesday. His colleagues who tried to intervene were also beaten up.

The infant, Sadia Siddique, was brought to Sion Hospital Sep 3 for lower respiratory tract infection. According to the doctors, she was recovering well and was moved to the general ward. However, her condition deteriorated and she was put in the intensive care unit, where she died Wednesday.

"Dr. Vishnu, who is physically challenged, sustained bruises and a fractured right hand," said Yogesh Pawar of MARD from Sion Hospital. "Relatives of patients beat up doctors every now and then. There is not enough security. This has to stop."

Promoted
Listen to the latest songs, only on JioSaavn.com
Around 400 doctors from Nagpur's government hospitals also joined Saturday's strike. "Manhandling and assault of doctors should stop. Authorities have to see to it that doctors are provided with proper security," said Bhausaheb Munde of MARD, Nagpur.

This is the ninth such incident this year, Nalawade said, while reiterating MARD's demand for better CCTV surveillance and security in hospitals. "We keep voicing our concerns but they fall on deaf ears."