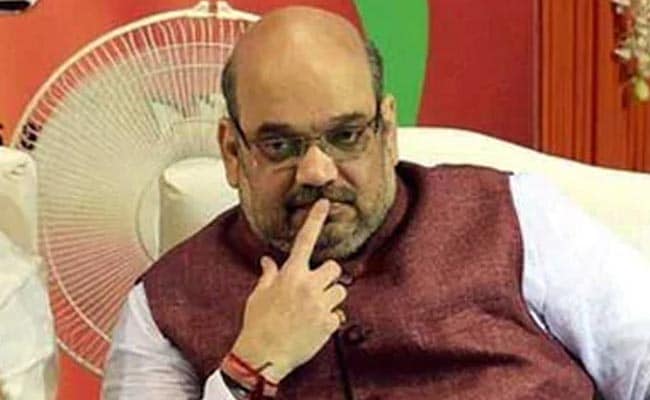 Amit Shah was discharged from Delhi's AIIMS, where he was admitted with swine flu, on Sunday.

The West Bengal BJP leadership on Monday said it has received clearance to land party president Amit Shah's chopper at two places in Malda region, putting an end to a raging controversy over the Mamata Banerjee government allegedly denying permission in this regard. The BJP leader will arrive in Malda on Tuesday to address a rally ahead of the Lok Sabha polls.

Mr Ghosh said the Border Security Force has already granted permission for the landing. "We are now awaiting security clearance by the local administration," he said.

Earlier in the day, the state had BJP issued a statement accusing the West Bengal government of denying permission for Mr Shah's chopper at the Malda airstrip. The statement said the local administration cited ongoing construction work to prevent the politician from landing when there was nothing of the sort going on.

The Trinamool government flatly denied the allegation, saying that the BJP was "peddling lies" after the "huge success" of the recent opposition rally in Kolkata. Ms Banerjee said the police may have only recommended a change of venue for the helipad because of security reasons. "Police had said that the chopper should land at some other place. I also changed my chopper's landing on their request. We have granted permission for the meeting as we believe in democracy. They (the BJP) are distorting information and misleading people. We have given permission," she told reporters outside the city airport on her way to north Bengal.

Trinamool Congress leader Derek O'Brien termed Union Minister Piyush Goyal's claims that the Mamata Banerjee government was trying to block Mr Shah's programmes, "be it a rally, yatra or landing of his chopper", as hilarious.

Nevertheless, the BJP president may have to skip a few of the five rallies he was expected to headline in West Bengal due to health concerns. "Amit Shah is scheduled to address two rallies on January 24 in South 24 Parganas district's Jaynagar and Nadia district's Krishnanagar. But the doctors have imposed certain restrictions as he has just recovered from swine flu. So he might not go to those venues if his health does not permit," said Mr Ghosh.

Mr Shah was discharged from Delhi's All India Institute of Medical Sciences, where he was being treated for swine flu, on Sunday.