Delhi violence: Sub-Inspector Meda Lal had suffered the injury during the violent clashes during a religious procession on Hanuman Jayanti. 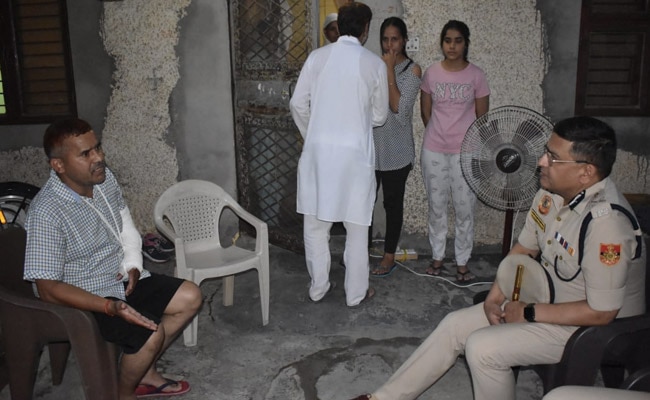 Delhi Police Commissioner Rakesh Asthana late on Sunday visited the sub-inspector's residence who sustained a bullet injury during the violence in Jahangirpuri, and assured him of full support from the department.

Sub-Inspector Meda Lal of Jahangirpuri Police Station had suffered the injury during the violent clashes that took place between two communities during a religious procession on April 16 evening.

Mr Asthana enquired about Mr Lal's well-being and said that the entire force is proud of the courage he displayed at the site of violence.

"CP Delhi visited Sub-Inspector Meda Lal of Police Station Jahangirpuri at his residence and enquired about his well being. CP, Delhi informed SI Meda Lal that the entire Force is proud of his courage and sense of duty, which helped in quickly controlling the unruly mob," said a statement by the Delhi police.

"He assured him of all possible support and assistance from the Department during these testing times," added the statement.

One more accused has been arrested in connection with clashes that broke out in Delhi's Jahangirpuri area on Saturday, taking the total number of arrests so far to 21.

Two juveniles have also been detained in the connection with the incident that left nine people injured, including eight police personnel and a civilian.

"One more accused has been arrested in connection with the Jahangirpuri violence case. He is found to be previously involved in a robbery and an attempt to murder case under Jahangirpuri Police station," Deputy Commissioner of Police (DCP) North-West, Usha Rangnani said.

Of the 20 accused persons in the case, 14 were produced before the Rohini court on Sunday, which sent two prime accused - Ansar and Aslam - to police custody for a day. The remaining 12 were sent to judicial custody for 14 days.

1,934 New Covid Cases In Delhi, Double The Number Of Cases On Wednesday