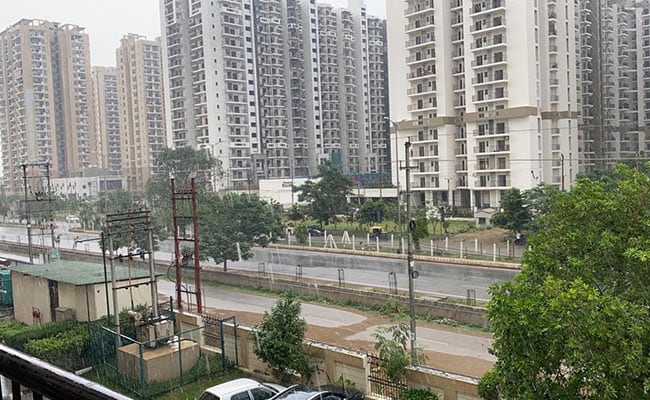 Weather News: Image of heavy rain in Noida on Wednesday

Thunderstorms and sharp showers hit parts of Noida, Delhi, Gurgaon, Manesar and neighbouring areas in Haryana on Wednesday. "Thunderstorm with light to moderate intensity rain" would occur in a few places of the National Capital Region (NCR) including Ghaziabad, Chhapraula, Noida and in Kurukshetra, Muzaffarnagar, Shamli, Khatauli, Sakoti Tanda and Daurala," the India Meteorological Department tweeted. Meerut and Modinagar in Uttar Pradesh will also get moderate rainfall the weather office said. No waterlogging has been reported in the NCR yet. The weather bureau has warned of thunderstorm and lightning in Uttarakhand, Punjab, Haryana, Bihar, Jharkhand, east Madhya Pradesh and Uttar Pradesh as well.

Video of heavy rain in Noida:

The Monsoons have reached most parts of India but the National Capital Region may have to wait for a few days due to an existing cyclonic circulation over eastern Uttar Pradesh. According to the India Meteorological Department, "large-scale atmospheric conditions are not favourable for further advance of Monsoon into Rajasthan, remaining parts of Gujarat, Punjab, Haryana and Delhi." The progress of Monsoon could be slow in parts of Uttar Pradesh during next five days as well.