A bench of Chief Justice D N Patel and Justice Jasmeet Singh said they are not granting any relief to the PDP leader. 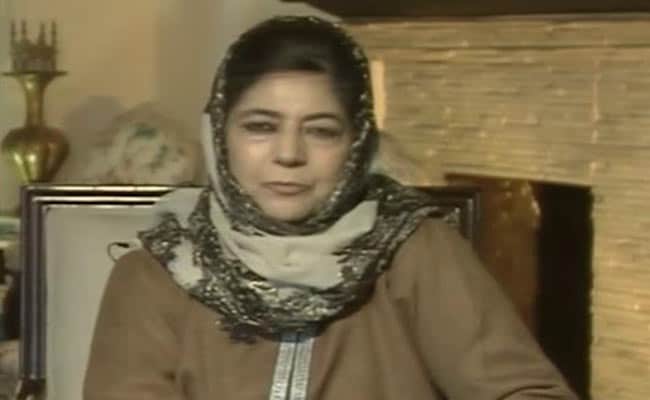 The 61-year-old leader has been served notice to appear at the probe agency headquarters.

The Delhi High Court on Friday refused to stay the summons issued to former Jammu and Kashmir chief minister Mehbooba Mufti by the Enforcement Directorate in a money laundering case.

A bench of Chief Justice D N Patel and Justice Jasmeet Singh said they are not granting any relief to the PDP leader.

The 61-year-old leader, who was released last year after more than a year in detention following the scrapping of Jammu and Kashmir's special status, has been served notice to appear at the Enforcement Directorate headquarters in the national capital.

The court asked the Enforcement Directorate to file a short note of submission along with the compilation of judgements relied upon by them before the next date on April 16.

The Enforcement Directorate, which had earlier summoned Mehbooba Mufti for March 15, had not insisted for her personal appearance at that time.

The former Jammu and Kashmir chief minister has been now summoned for March 22 by the Enforcement Directorate, also represented through Additional Solicitor General Chetan Sharma and advocate Amit Mahajan.

Senior advocate Nitya Ramakrishnan, representing Mehbooba Mufti, urged the court to ask Enforcement Directorate not to insist for her personal presence as was done earlier.

To this, the bench said, "We are not giving any stay. We are not granting any relief."

Mehbooba Mufti has sought quashing of summons issued to her by the Enforcement Directorate in a money laundering case.

She has also sought to declare section 50 of the Prevention of Money Laundering Act as void and inoperative, being unfairly discriminatory, bereft of safeguards, and violative of Article 20(3) of the Constitution. Section 50 of the Act empowers the authority, that is, officers of the Enforcement Directorate, to summon any person to give evidence or produce records. All persons summoned are bound to answer the questions put to them and to produce the documents as required by the ED officers, failing which they can be penalized under the Act.

She has also sought an interim stay on the summons until the question of law in relation to the constitutionality of Section 50 of the Act is decided.

During the hearing, Tushar Mehta said there was no need to issue a formal notice to them as they are already appearing before the court and said they will file a short note on the issue of the question of law.

Mehbooba Mufti, in her petition, said she has received summons from the Enforcement Directorate under the provisions of the PMLA, purporting to call for ''evidence'' on pain of punishment, whereas she is, to all intents and purposes, a subject of investigation.

"She has not been informed if she is being summoned as an accused or as a witness. She has also not been informed of what she is being summoned in connection with and the scheduled offence under the PMLA which gave rise to the proceedings in respect of which impugned summons has been issued to her. The petitioner is not the subject of investigation, nor is she an accused, in any of the scheduled offences to the best of her knowledge," the plea said.

The plea claimed that ever since Mehbooba Mufti was released from the preventive detention following the formal abrogation of Article 370 of the Constitution, there have been a series of hostile acts by the State, against her, acquaintances and old family friends, who have all been summoned by the ED and a roving inquiry about her personal, political and financial affairs was made, in the course of which their personal devices have been seized.

She has also written a letter to the Enforcement Directorate pointing to the roving nature of the inquiry undertaken in the case thus far and that in the event that she is questioned, she will insist on the legitimacy of the process, it said.

"As a responsible member of society, the petitioner is always ready and willing to aid the process of law. However, it is equally her duty to bring to the notice of this court, deviations from due process in legislative and executive acts. The petitioner apprehends that the impugned notice is a means of bringing undue pressure and harassment upon her and therefore, the petitioner wishes to assert her constitutional rights in this regard," the petition said.

"GOI's tactics to intimidate & browbeat political opponents to make them toe their line has become tediously predictable. They don't want us to raise questions about its punitive actions & policies. Such short-sighted scheming won't work," she wrote on Twitter, without any mention of the Enforcement Directorate notice.