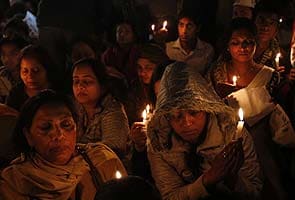 New Delhi: The 23-year-old medical student whose savage gang-rape on a moving bus provoked outrage and protests through India died early this morning in a hospital in Singapore. Her parents were by her side.

In Delhi, government officials appealed for calm and vowed that those guilty of the murderous assault will be severely punished. Prime Minister Manmohan Singh said today, "I join the nation in conveying to her family and friends my deepest condolences at this terrible loss. I want to tell them and the nation that while she may have lost her battle for life, it is up to us all to ensure that her death will not have been in vain." Home Minister Sushil Kumar Shinde told NDTV, "I pledge to work to strengthen the laws and ensure that such an incident never gets repeated again."

A special plane is being sent from Delhi to collect her body and family. It is expected to land in Delhi tonight. (Read)

Doctors at the Mount Elizabeth Hospital in Singapore, where she was admitted on  Wednesday night said she died of "severe organ failure following serious injuries to her body and brain.

"She was courageous in fighting for her life for so long against the odds but the trauma to her body was too severe for her to overcome," a statement by the hospital said. (India's Daughter, R.I.P.: the reactions)

For 13 days, the student fought for her life. She endured three major surgeries, brain injury and a cardiac arrest at a Delhi hospital before experts decided to move her in an air ambulance to Singapore on Tuesday night.

After the monstrous attack on her on December 16, a grid of anger and grief fastened cities across India.

In Delhi and elsewhere, demonstrators have been marching every day, demanding a swift trial for the six men arrested for the heinous attack, as well as stricter anti-rape laws and more safety for women. (Read: In tweet, Delhi Police appeals for peace and calm)

In messages that the student scribbled for her family while on life support systems, she reportedly asked if the six men who had damaged her so badly that her intestines had to be removed had been caught and punished.

Their trial is likely to begin on January 3; the government has promised daily hearings to ensure a verdict is delivered quickly. ('Amanat' lost: can India change? Comment here)

Days before she was flown to Singapore, she shared the details of her attack with two different judges. Her testimony was not video-taped but will be used in the trial.

On December 16, the student and a male friend boarded a bus after watching a film when they were attacked by six men who took turns to rape her. They also beat the couple with an iron rod.

The bus kept circling a 31-kilometre stretch in South Delhi, its tinted windows concealing the savagery within as it rolled unstopped through a series of police checkpoints.

Almost an hour later, the couple was thrown from the bus, battered and bleeding; a passer-by phoned the police for help.

With Delhi as the epicentre, the protests scaled up quickly.   Last weekend, the police clashed with thousands of demonstrators in Delhi. An injured constable collapsed; he died in hospital on December 25.

The government has promised to amend criminal laws to include the death penalty for extreme cases of sexual assault.

Promoted
Listen to the latest songs, only on JioSaavn.com
In Delhi, five fast-track courts will start functioning in January with daily hearings for all rape cases. Measures to make public transport safer at night for women are being debuted.