Delhi gang-rape case: The four men who have been given the death sentence 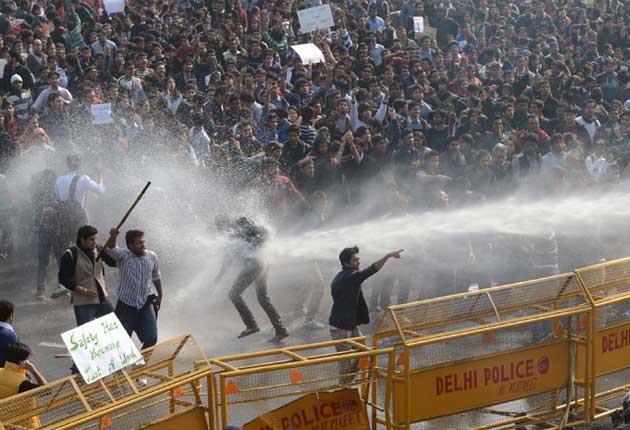 The December 16 gang-rape triggered massive protests across the country

New Delhi: All four convicts in the gang-rape and murder case of a 23-year-old medical student have been given the death sentence. Bus cleaner Akshay Thakur, gym instructor Vinay Sharma, fruit-seller Pawan Gupta, and unemployed Mukesh Singh were found guilty on 13 counts that included rape, murder and destruction of evidence on Tuesday.

All four of them lived in or around an unauthorised slum in the south of the city favoured by hundreds of labourers, most of them migrant workers.

Ram Singh, the regular driver of the bus used for the attack, was found hanging in his prison cell in maximum-security Tihar Jail in March. The 32-year-old had confessed privately to his role, according to his parents, but during the trial he had denied the long list of charges including murder, rape and kidnapping.

Here are profiles of the four men who have been given the death sentence:

The brother of Ram Singh who migrated to New Delhi from Rajasthan. He frequently worked with his brother on the bus and also tried getting a job with a construction company in Delhi.

During court proceedings in April, the unmarried labourer, who has a tattoo of two swords signifying "bravery" on his left arm, told news agency AFP he was a "very hard working man" and wanted to "lead a simple life".

Aged 29 at the time of the crime, he denied the charges against him and told the court that he "respected women".

Aged 20 at the time of the crime, he denied being on the bus. He worked as a helper at a local gym and lived in the same neighbourhood as Mukesh and Ram Singh.

He had completed his schooling, unlike the other convicts who are school dropouts, and during the trial said he wanted to appear for a recruitment test for a job with the Indian Air Force.

Sharma submitted an application to the judge to be moved out of Tihar jail after being assaulted by inmates. He suffered a fractured left hand while in custody.

The youngest of the rapists, aged 19,
Gupta was a fruitseller who also worked as labourer on roads and construction sites. During wedding season, he would work with a catering company.

He was arrested at the Ram Dass Camp where he lived with his cousin and was known as a friend of Ram Singh.


A married father of a two-year-old son, Thakur also worked as a helper with Ram Singh and had earlier been employed in a local liquor factory and in a brick kiln

Promoted
Listen to the latest songs, only on JioSaavn.com
Aged 28 at the time of the crime, he fled from Delhi on December 17, but was arrested at his father-in-law's home in the eastern state of Bihar.

His wife, Punita Devi, told the police, that if her husband is found guilty then he should be "shot dead".