Delhi Vidhan Sabha 2020: The drumbeats of victory sounded loud and clear as hundreds of party workers danced to the words "Lage raho Kejriwal" set to tune. 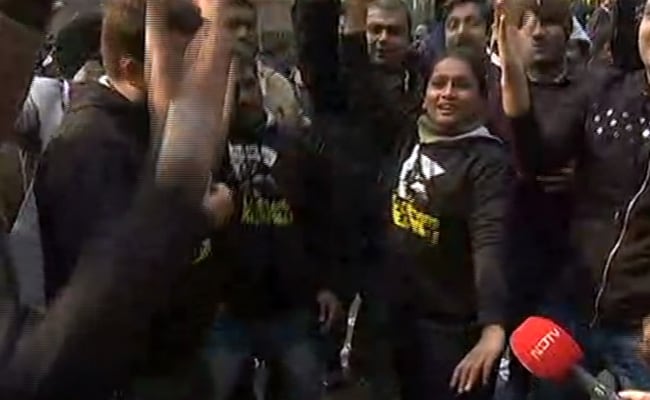 With blue and white balloons, buntings and giant cutouts of their leader Arvind Kejriwal, AAP workers went into early celebration mode at their party headquarters on Tuesday as trends showed the party leading in 57 of 70 seats. The drumbeats of victory sounded loud and clear as hundreds of party workers danced to the words "Lage raho Kejriwal" set to tune.

A stage was set up on the roof of the party office, decorated with balloons and flowers, from where Mr Kejriwal is expected to address party workers after the final results are announced.

The chief minister was at the party office, following trends as the votes were counted -- the trends suggesting that the party would sweep the polls in keeping with its symbol, the broom -- but did not come out.

The Aam Aadmi Party was leading in 57 seats and the BJP in 13 seats, according to trends on the Election Commission website.

"We knew it. We have changed the politics of this country. Now it is Delhi, next is India," said a jubilant Sanjeev Singh, a party volunteer from Hari Nagar.

"We hope we get such a clear majority that a message goes out that doing Hindu-Muslim politics will not work anymore," added another volunteer Fareen Khan.

The AAP headquarters were decorated with blue and white balloons and big cut-outs of the man who steered the campaign and looked set to form government for a second consecutive term.

"People of Delhi have showed the way to the country that only development work will take the country forward and not Hindu Muslim politics. All kind of divisive politics has been rejected by the people of Delhi and we will win 70 out of 70 seats," said Sushil Gupta, AAP Rajya Sabha MP.

According to the Election Commission website, AAP convenor Kejriwal is leading in his New Delhi constituency.

Polling for the 70-member Delhi Assembly was held on Saturday.

(Except for the headline, this story has not been edited by NDTV staff and is published from a syndicated feed.)
Comments
Delhi election resultdelhi poll result