Delhi election: "The condition of Burari today is the same as that of Bihar in 2005," Bihar Chief Minister Nitish Kumar said 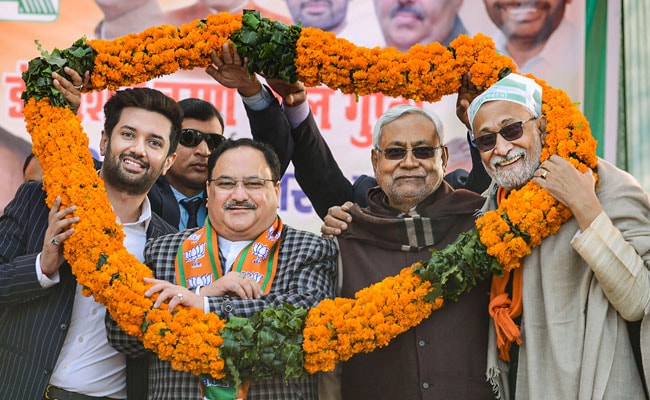 JP Nadda, Nitish Kumar and Chirag Paswan at a rally in Delhi on Sunday

Bihar Chief Minister Nitish Kumar today asked the people of Delhi to give the BJP a chance to run the national capital. At his first rally in Delhi ahead of the single-phase election on February 8, Mr Kumar, with BJP president Amit Shah at his side, alleged the Aam Aadmi Party (AAP) government led by his counterpart Arvind Kejriwal "has not done any real development".

"The condition of Burari today is the same as that of Bihar in 2005... They (AAP government) talk about water supply but there's no water. Roads, electricity, all are not in good shape. We ensured every house in Bihar received power supply. Everyone knows what's the condition here (Burari) now," Mr Kumar said, referring to the locality in north Delhi that has often been in the news as among one of the least developed in the national capital.

Mr Kumar's Janata Dal United (JDU) is fighting two seats and the BJP 68 in an alliance in the election to Delhi's 70-member assembly.

"The Congress got 15 years, AAP got five, so now please give five years to BJP and see how it changes the city," Mr Kumar said. "In Delhi, they only talk about free stuff but have not done any real development. For many years, 40 lakh people lived at unauthorised colonies in Delhi. But they have been regularised by the centre," he added.

On Mr Kejriwal's comment about people from Bihar coming to Delhi for medical treatment for some hundreds rupees on transport and getting the best facilities in government hospitals, Mr Kumar said the AAP leader was "lying".

"What a lie. They don't spend on patients. The centre spends money through Ayushman Bharat," the Bihar Chief Minister said, referring to Mr Kejriwal's comment in September last year that a person from Bihar buys a ticket to Delhi for Rs 500 and returns after getting free treatment worth Rs 5 lakh.

"...It makes us happy as they are people of our own country, but Delhi has its own capacity," Mr Kejriwal had said.

Amit Shah joined Mr Kumar in attacking the AAP government. "They announced their manifesto 20 days ago, but removed it from their website because people questioned them. But I have brought their manifesto with me. They promised schools like in Europe. Have you seen any such school? You tell me, the people of Burari. They promised 15 lakh CCTVs, but posted photos of only two CCTVs," Mr Shah said.

The BJP is hoping for a win in Delhi, where it has been out of power since 1998; however, it is ruling in all the municipal corporations in the city. The BJP also took all seven Lok Sabha seats in Delhi in the national election held in April and May last year.

It will be a major test for Mr Kejriwal, whose relatively new party hasn't seen much success in the national elections in 2014 and 2019, despite its top performance in the Delhi election in 2015. The BJP is banking on Prime Minister Narendra Modi's election-winning formula to take Delhi. Housing, education and demand for statehood are some of the big issues.

The Aam Aadmi Party needs to set a target of winning more seats in the upcoming election than it won in the 2015 polls when it secured 67 of the 70 assembly seats, Mr Kejriwal told party members last month.