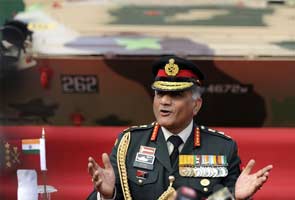 New Delhi: A Delhi Court has deferred till May 5, decision on whether to summon Army Chief General VK Singh in connection with a defamation suit filed against him by retired officer, Lieutenant General Tejinder Singh, the man he has accused of trying to bribe him to clear the purchase of "substandard" trucks for the Indian Army.

Lt Gen Tejinder Singh claims that allegations made against him in a March 5 press release issued by the Army are "completely false and concocted". One of those allegations is that he offered General VK Singh Rs 14 crore in bribe on behalf of a company called Vectra in 2010. The Army Chief had caused a stir when he made that allegation in an interview last month. That matter is now being investigated by the CBI and Gen Singh's statement has been recorded by the investigation agency.

Ravi Rishi, the CEO of Vectra, which provides Tatra trucks to the Army, has also been questioned repeatedly by the CBI.  Mr Rishi has denied that Tejinder Singh either formally or informally represented Vectra as a middleman.

Promoted
Listen to the latest songs, only on JioSaavn.com
Gen Tejinder Singh had testified before the court in support of his complaint against the Army Chief last Tuesday and had sought that the court summon Gen VK Singh.

The retired Army officer also approached the Supreme Court yesterday, asking it to sanction a CBI inquiry against the Army Chief for allegedly ordering the illegal monitoring of phones in the Defence Ministry. Tejinder Singh says the CBI should raid the homes and offices of Army Chief General VK Singh and his relatives.
Comments
Army ChiefTejinder SinghGeneral VK Singh