On Saturday, lawyers and police clashed at the Tis Hazari court complex over a parking dispute. The lawyers alleged members of their group were injured after police opened fire but police said shots were fired in the air to "ensure the safety of undertrials"

Thousands of police officers, holding placards with messages like "Save the Saviours", shouted "CP saheb, samne aao, samne aao (Police Commissioner, face us)" gathered outside Delhi Police headquarters this afternoon in an unprecedented protest after violent clashes between cops and lawyers at the city's Tis Hazari court complex on Saturday. By evening, the officers' families and children had joined the protests - they gathered at India Gate in central Delhi to hold a candlelight vigil.

The lack of any political response to Saturday's clash, where at least 20 policemen were injured, brought on the crisis. Police officers were left further disheartened and angry after an attack on a policeman outside a district court in Delhi's Saket on Monday also went unpunished. The second attack, also by lawyers, was caught on a mobile phone video. Many of the assembled officers and their families said they now feared being targeted when in uniform.

"Delhi police officers are on duty around the clock so people can celebrate every festival without fear. But while making those sacrifices, they get thrashed on the roads. Don't we have feelings or any rights?" Munesh Dahiya, the wife of a police officer, demanded.

One of the protesting officers broke down and cried while speaking to NDTV.

"We don't wear this uniform to get beaten. Our mothers and fathers worked hard to send us here... we work hard to take care of our children," an unidentified policeman told NDTV in tears, adding, "There are so many political parties... BJP, AAP, Congress.. all went to see injured lawyers but not one person came to us."

WATCH | "We also have kids": Cop gets emotional during Delhi police's protest over attack on colleague.

"I can't tell you my name. I have just come from night duty... only changed out of my uniform. The Police Commissioner has to listen to us... senior officers are like mother, father. If they don't listen, then who will?" another officer said.

A woman constable at the protest was quoted by news agency ANI as saying she has felt scared ever since the Tis Hazari clash took place. "Once my police uniform used to motivate me to work but today I am too scared to walk out in this uniform," she said. 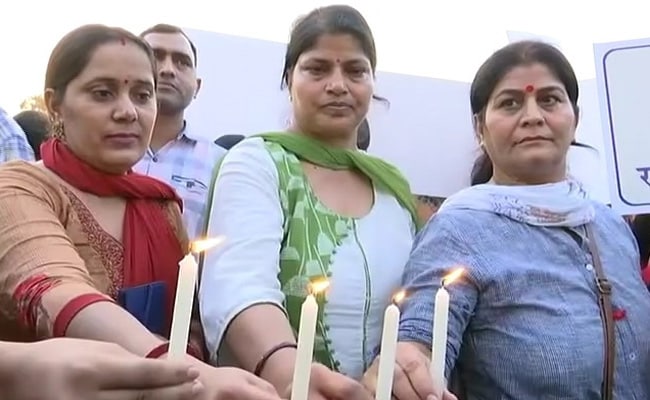 Earlier today Delhi Police Commissioner Amulya Patnaik was heckled and booed by his officers while trying to defuse the situation and persuade them to return to their posts.

"We have to behave like a disciplined force. The government and the people expect us to uphold the law, it is our big responsibility. I urge you to resume duty," Delhi Police Commissioner Amulya Patnaik said when he emerged to address the massive crowd of policemen on the streets.

At least 20 policemen and eight lawyers were injured and 20 vehicles were vandalised in Saturday's clash. That attack was followed by another violent confrontation, caught on mobile phone camera, on Monday, when a policeman was slapped and beaten outside Saket District Court by a group of lawyers. 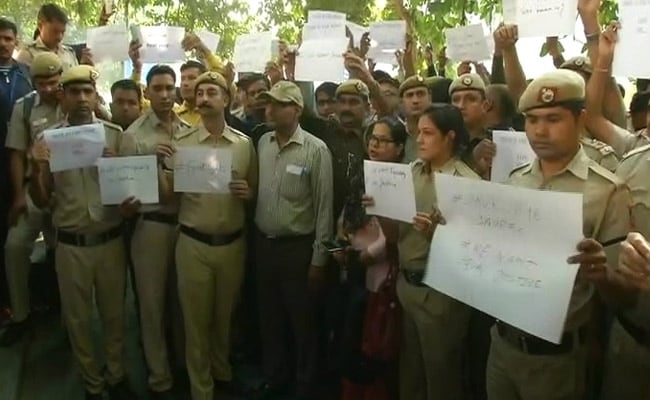 Delhi Police are protesting against attacks by lawyers

Bar associations had condemned the Tis Hazari incident and called for a one-day strike. Although it was called off by the Bar Council of India (BCI) after the High Court's orders, which it described as "historic", lawyers at district courts in Delhi refused to work today.

"The way some lawyers are acting even after such a nice step of Delhi High Court... abstaining from court or resorting to violence will not help. Rather by doing this we are losing the sympathy of courts... even general public's opinion is going adverse to us. Result may be dangerous," he wrote.

On Saturday, lawyers and police clashed at the Tis Hazari court complex over a parking dispute. The lawyers alleged members of their group were injured after police opened fire but police said shots were fired in the air to "ensure the safety of undertrials". 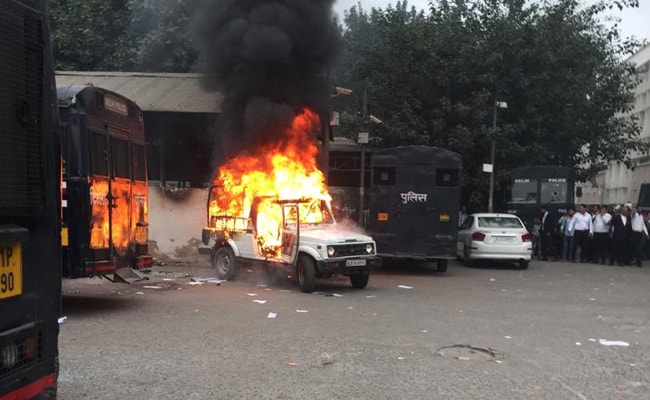 The lawyers claimed they had been targeted by the police; "They want to paint us as villains," Mohit Mathur, who appeared for the Bar Council of India in Saturday's hearing, said.

Shocked by the incident the Delhi High Court took suo motu cognisance and held an emergency hearing on the same day. In the hearing the court came down heavily on the police force, transferring two senior officers, suspending two others and awarding compensation only to injured lawyers.

A judicial probe was also ordered. 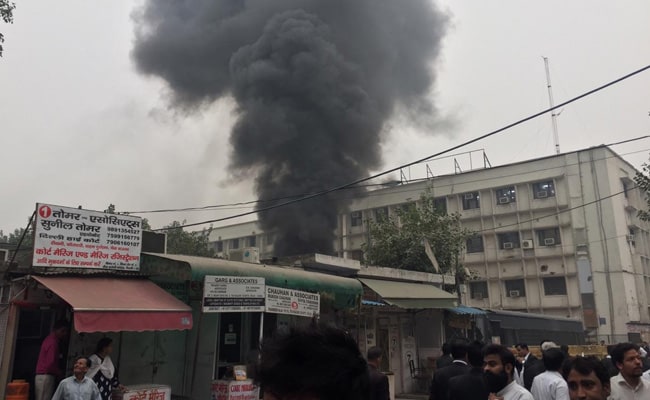 Union Minister of State Kiren Rijiju reacted to today's protest by saying that being a cop was a thankless job, in a tweet that was later deleted.

"Being a cop is a thankless job. But they don't do it for thanks. Police officers put their lives on the line every day. They are damned if they do, and damned even if they don't. What gets lost in all the anti-police rhetoric is the family left at home while a policeman serves," Mr Rijiju, the Minister of State for Youth and Sports Affairs, wrote in the now-deleted tweet.

The Indian Police Service (IPS) has tweeted in support of its Delhi colleagues, saying police officers across the country supported their action.

"Incident involving police and lawyers unfortunate. All should take a balanced view of it based on facts in public domain. Countrywide, police stands in solidarity with those police personnel subjected to physical assault and humiliation. Condemn all attempts to break law, by anyone!" the tweet reads.

Incident involving police & lawyers unfortunate. All should take a balanced view of it based on facts in public domain. Countrywide, police stands in solidarity with those police personnel subjected to physical assault & humiliation. Condemn all attempts to break law, by anyone!

Congress leader Randeep Surjewala has also backed the protesting police, criticising the BJP government at the centre, which controls police in Delhi, for a "new low".

A new low in 72 years - Police on protest in ‘National Capital of Delhi'.

Where will BJP take the country?

"A new low in 72 years - police on protest in National Capital of Delhi. Is this BJP's 'New India'? Where will BJP take the country? Where is India's HM, Sh. Amit Shah," he posted on Twitter.