Read inOther Languages
This Article is From Feb 08, 2020

Kalitara Mandal, who has seen and participated in nearly all elections in India in the last century, fondly recalls the time when ballot boxes were used to cast votes. 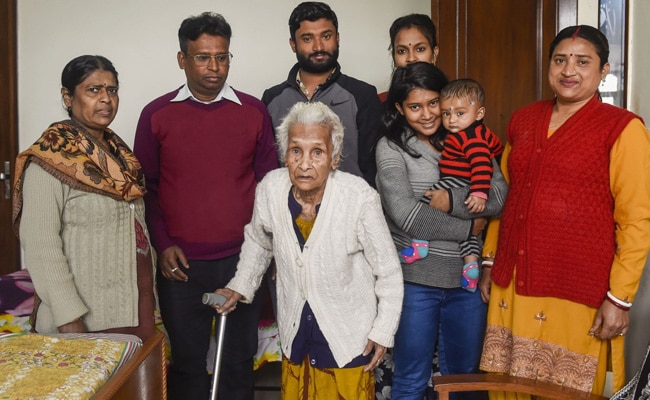 Kalitara Mandal said she has voted with big machines (EVMs) too.

At 111, Kalitara Mandal has lost all her teeth but definitely not her appetite for fish and the will to participate in elections as this oldest voter in Delhi is still excited to get her wrinkled finger inked on Saturday.

Born in undivided India in 1908, Ms Mandal has seen the subcontinent go through turbulent phases many times, including two partitions, and lived "twice as a refugee" in India along with her family before finding a home in the national capital.

In an exclusive interview to news agency PTI, Ms Mandal, who has seen and participated in nearly all elections in India in the last century, fondly recalls the time when ballot boxes were used to cast votes.

The centenarian is the eldest of four generations of Mandals who live in CR Park, a famous Bengali enclave set up in the national capital after the 1971 Indo-Pakistan War that led to the creation of Bangladesh.

While Ms Mandal was born in Barisal (now in Bangladesh) three years after the 1905 Bengal partition, the youngest in the family, her seven-month-old great grandson Jiyansh, was born in 2019 after the Lok Sabha elections.

"She is quite eager to take part in the elections as a voter. Last year too she had voted in the Lok Sabha polls by going to the polling station. This time also she is eager to get her finger inked," said her son Sukh Ranjan.

A senior poll official said the Mandal family had applied for postal ballot facility for her at home, but the duration for that was over.

"We are providing a special vehicle for her and her family in CR Park on Saturday," she told news agency PTI.

Ms Mandal's grandson Suraj, 30, said she is willing to go to the polling station to exercise her franchise and the family will go together to vote.

Asked what her message is to people, especially those who don''t go to vote out of apathy or laziness, Ms Mandal said, "Go out and vote. Democracy thrives on people and people must participate as each vote counts".

As many as 132 centenarian voters -- 68 men and 64 women -- are eligible to exercise their franchise in the February 8 election and they will be treated "as VIPs" on polling day, officials said.

Bachchan Singh, 111, the oldest voter in the city in the 2019 elections who used to reside in Tilak Nagar, died last December.

Sukh Ranjan, in early 50s, says his mother will turn 112 years old in April but still has good memory of her life's journey.

A few years before the 1971 war, Ms Mandal along with her husband and children migrated to India from then East Pakistan to seek shelter after communal disturbance. They took shelter as refugees along with some others in Andhra Pradesh. That's where Sukh Ranjan, Mandal's youngest son, was born.

After the situation became normal, the family went back. But they returned after the 1971 war and took refuge at a place in Madhya Pradesh, which now comes under Chhattisgarh.

Ms Mandal's husband Jnanendra died when they lived in MP. In the early 80s, her two elder sons came to Delhi to do odd jobs for a living. After a few years, the family settled in CR Park.

"Earlier we were living in DDA flats. Now we have our own home," Sukh Ranjan said.

Of Ms Mandal's seven children -- four sons and three daughters -- five have passed away. While Sukh Ranjan is her only remaining son, she has one surviving daughter who lives in Bangladesh and had recently visited the family here.

Asked about her favourite things, the 111-year-old woman who speaks only Bengali, said, "Maach (fish), paan".

"She doesn't have any teeth left, but she eats fish, especially ''hilsa'' with great delight. Paan is also her favourite," says Suraj, as her grandmother reaches out for the paan box, always kept by her bedside.

He said the family matriarch still manages to walk a little with the help of a stick and her eyesight is so good that she sometimes threads a needle.

At times she feels frail and "pleads to God to seek deliverance", said Sukh Ranjan. "We tell her that she will live longer and take part in more elections," he said.