Centre's policy for the sector has begun delivering results, Rajnath Singh said at DefExpo-2020 in Lucknow 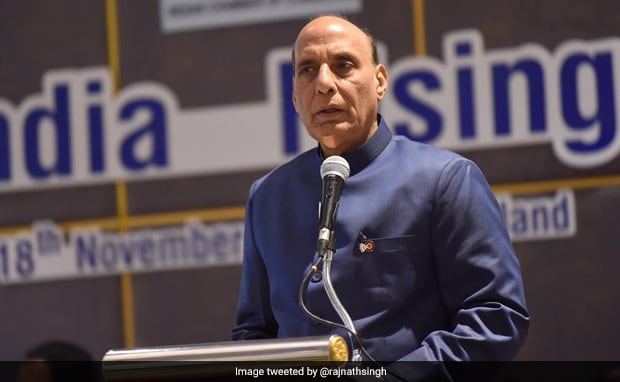 Defence Minister Rajnath Singh on Friday said over 200 MoUs have been signed so far at the DefExpo, asserting that the country is on its way to achieve the target of USD 5 billion in defence exports by 2024.

Addressing an event at DefExpo-2020 in Lucknow, he said the Centre's policy for the sector has begun delivering results.

"In 2018-19, defence exports were Rs 10,745 crore, which was seven times the exports in 2016-17. Seeing the success of this Defence expo, I am sure that by 2024 we will achieve the target of five billion dollars in defence exports," the minister said.

He said so far 200 agreements have been signed during this DefExpo and described the outcome as "historic".

Defence Secretary Ajay Kumar said the initial target for the Lucknow DefExpo was 100 Memorandums of Understanding and business agreements, but till now 200 MoUs have been signed.

Mr Kumar described it as the beginning of a new chapter in this sector.

Rajnath Singh said this reflected Indian capabilities in defence production, according to a press release.

Defence manufacturing firms from across the world are participating in the five-day event inaugurated on Wednesday by Prime Minister Narendra Modi, who indicated that the country is eyeing the export target of USD 5 billion by 2024.

"Uttar Pradesh has emerged as a favourite investment destination," he said.

The chief minister said that during the last two and a half years, the state government has attracted investment of more than Rs 2.5 lakh crore, which will help provide employment to over 33 lakh people.

He said the land banks at Aligarh and Jhansi, part of the state's defence manufacturing corridor, are booked.

Land is now available for industrial clusters along the Purvanchal Expressway, Bundelkhand Expressway and Ganga Expressway, he said.