Defense Minister Rajnath Singh said the future of any country depends on its youth as they are its biggest strength and a catalyst and source of change. 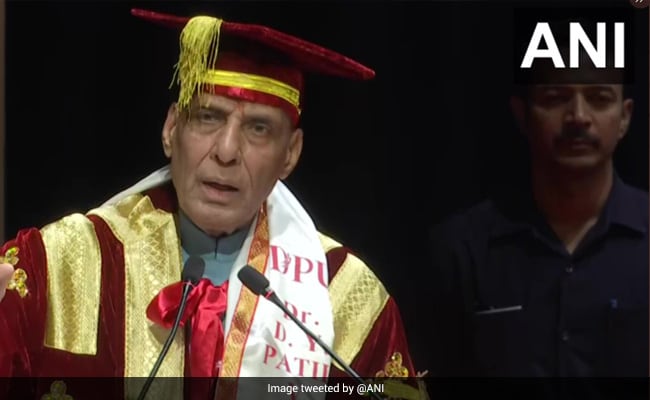 Rajnath Singh said both Al-Qaeda and Infosys have educated youth working for them, aimed with a mission.

Defence Minister Rajnath Singh today said there have been many instances of terror incidents in India involving educated youth and pointed out that extremists involved in the 2001 World Trade Center bombing in New York had undergone rigorous pilot training.

Speaking at the convocation ceremony of Dr D Y Patil Vidyapeeth in Pune, Rajnath Singh said the future of any country depends on its youth as they are its biggest strength and a catalyst and source of change.

"You must have seen many examples (of this) in the world. You must have also seen the most developed country in the world, the US. Many youth who underwent the difficult pilot training...they flew an aircraft into the World Trade Center that led to the 9/11 attacks. In India, not just one, in many incidents, youth involved in terrorist incidents are educated," Rajnath Singh said.

He also referred to an article written by noted columnist Thomas Friedman drawing a parallel between the terrorist outfit Al-Qaeda and Indian software giant Infosys.

Both have educated youth working for them, possessed with a mission and commitment. While the youth associated with Al-Qaeda are involved in killings, the ones with Infosys work for the betterment of humanity, the defence minister said.

"Even after doing a lot of reading and writing, being a trained pilot in America, one can become Khalid Sheikh or Mohammed Atta (responsible for the 9/11 attacks). Despite being a billionaire, one can become Osama bin Laden. But one can become APJ Abdul Kalam by being a newspaper vendor, despite all the struggles," Rajnath Singh said.

The senior BJP leader stated Swami Vivekananda has said every society and nation has its own basic nature and only by developing that it can move forward.