The JD(U), which has already made it clear that its doors are open for the veteran socialist leader, indicated it was amenable to accepting his suggestions. "The issues he has raised in his letter to the Chief Minister are undoubtedly worth consideration," JD(U) spokesman Rajiv Ranjan Prasad said. 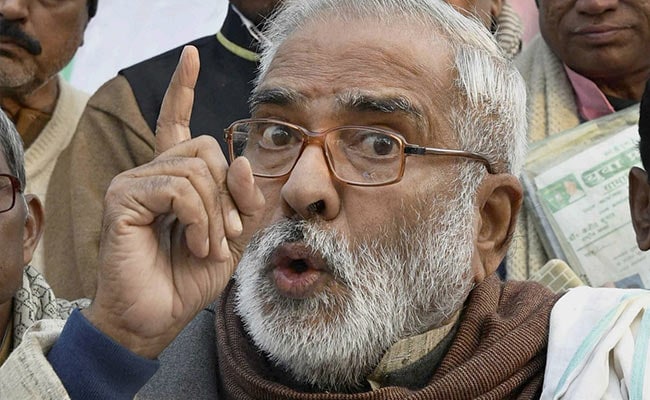 Raghuvansh Prasad Singh, a top leader of the RJD, resigned from Lalu Yadav's party on Thursday

A day after leaving Lalu Yadav's party RJD, former union minister Raghuvansh Prasad Singh wrote to Bihar Chief Minister Nitish Kumar seeking extension of MGNREGA benefits to the farm sector, a step being seen as an attempt by the veteran socialist leader to get closer to the ruling JD(U).

In a letter to Nitish Kumar, Raghuvansh Prasad Singh, one of his most vitriolic critics while in the RJD, said the MGNREGA law needed to be amended and its benefits extended to the farm sector.

Since its launch in 2006, the rural employment guarantee scheme has aimed to provide livelihood security in rural areas by guaranteeing at least 100 days of minimum wage employment, mostly in the construction of durable assets such as roads, canals and ponds.

Several Chief Ministers have often sought extension of the benefits of the scheme to the farm sector.

In his letter posted on Facebook, the former union minister also asked Nitish Kumar to facilitate the return of the begging bowl of Lord Buddha from Kabul. He also demanded that the chief minister unfurl the national flag at Vaishali every Republic Day.

Vaishali is the parliamentary constituency Mr Singh represented for five successive terms before his defeat in 2014.

Mr Singh had resigned from the RJD, the main opposition party in Bihar, on Thursday, triggering speculation about his joining the ruling JD(U). However, RJD supremo Lalu Yadav, serving time in jail in four fodder scam cases in Ranchi, had rejected his resignation.

"For four decades, we have together discussed political, social and even family matters. You get well soon and we will discuss again. You are not going anywhere, you understand," Lalu Yadav had written to Raghuvansh Prasad Singh on Thursday, after the latter made it clear that he was quitting the party.

Mr Singh, who is admitted to the AIIMS, New Delhi, because of post COVID-19 complications, has still not made it clear whether he will stay in the RJD or shift to the JD(U), reported news agency Press Trust of India.

The departure of Raghuvansh Prasad Singh from the RJD is being seen as a major "psychological setback" for the party as a sizeable section of Rajputs still back the opposition party while all other upper castes vote for the BJP or the Congress.

Mr Singh, who as the Union Rural Development Minister piloted the NREGA Bill, urged Nitish Kumar to bring an ordinance to amend the relevant law to extend its benefits to the farm sector.

He insisted that the ordinance be brought before the model code of conduct for election kicks in.

Assembly elections are likely in Bihar in October-November, and once the model code comes into force, no policy decision can be made.

The JD(U), which has already made it clear that its doors are open for the veteran socialist leader, indicated it was amenable to accepting his suggestions.

"The issues he has raised in his letter to the Chief Minister are undoubtedly worth consideration," JD(U) spokesman Rajiv Ranjan Prasad said.

"One thing is clear that Raghuvansh Babu was humiliated and insulted in the RJD and he swallowed it during his long stint in the party he nursed with his blood and sweat", Rajiv Ranjan Prasad said.

He said Mr Singh's decision to quit the RJD had left a "big hole in the party's sinking boat".

Before Mr Singh, seven MLAs and five MLCs, including those belonging to the Yadav caste and Muslims, the bedrock of the RJD's support base, had resigned and joined the JD(U).