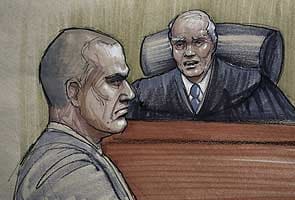 Chicago: A court in Chicago sentenced 26/11 plotter David Coleman Headley to 35 years in prison for his role in Mumbai terror attacks and Denmark terror plot.

Here is the full statement by the US department of justice:

Chicago - David Coleman Headley, a US citizen partly of Pakistani descent, was sentenced today to 35 years in prison for a dozen federal terrorism crimes relating to his role in planning the November 2008 terrorist attacks in Mumbai, India and a subsequent proposed attack on a newspaper in Denmark.  Headley pleaded guilty in March 2010 to all 12 counts that were brought against him following his arrest in October 2009 as he was about to leave the country.  Immediately after his arrest, Headley began cooperating with authorities.

Headley, 52, was ordered to serve 35 years, followed by five years of supervised release by US District Judge Harry Leinenweber.  There is no federal parole and defendants must serve at least 85 percent of their sentence.

"Mr. Headley is a terrorist," Judge Leinenweber said in imposing the sentence.

"There is little question that life imprisonment would be an appropriate punishment for Headley's incredibly serious crimes but for the significant value provided by his immediate and extensive cooperation," the government argued in seeking a sentence of 30 to 35 years.

In pleading guilty and later testifying for the government at the trial of a co-defendant, Headley admitted that he attended training camps in Pakistan operated by Lashkar e Tayyiba, a terrorist organization operating in that country, on five separate occasions between 2002 and 2005.  In late 2005, Headley received instructions from three members of Lashkar to travel to India to conduct surveillance, which he did five times leading up to the Mumbai attacks in 2008 that killed approximately 164 people, including six Americans, and wounded hundreds more. Headley's plea agreement in March 2010 stated that he "has provided substantial assistance to the criminal investigation, and also has provided information of significant intelligence value."

In consideration of Headley's past cooperation and anticipated future cooperation, which would include debriefings for the purpose of gathering intelligence and national security information, as well as testifying in any foreign judicial proceedings held in the United States by way of deposition, video-conferencing or letters rogatory, the Attorney General of the United States authorized the U.S. Attorney's Office not to seek the death penalty.

"Today's sentence is an important milestone in our continuing efforts to hold accountable those responsible for the Mumbai terrorist attacks and to achieve justice for the victims.  Our investigations into Mumbai attacks and the Denmark terror plot are ongoing and active.  I thank the many agents, analysts and prosecutors responsible for this investigation and prosecution," said Lisa Monaco, Assistant Attorney General for National Security.

After receiving instructions in late 2005 to conduct surveillance in India, Headley changed his given name from Daood Gilani in February 2006 in Philadelphia to facilitate his activities on behalf of Lashkar by portraying himself in India as an American who was neither Muslim nor Pakistani.  In the early summer of 2006, Headley and two Lashkar members discussed opening an immigration office in Mumbai as a cover for his surveillance activities.

Headley eventually made five extended trips to Mumbai - in September 2006, February and September 2007, and April and July 2008 - each time making videotapes of various potential targets, including those attacked in November 2008.  Before each trip, Lashkar members and associates instructed Headley regarding specific locations where he was to conduct surveillance.  After each trip, Headley traveled to Pakistan to meet with Lashkar members and associates, report on the results of his surveillance, and provide the surveillance videos.

Before the April 2008 surveillance trip, Headley and co-conspirators in Pakistan discussed potential landing sites in Mumbai for a team of attackers who would arrive by sea.  Headley returned to Mumbai with a global positioning system device and took boat trips around the Mumbai harbor and entered various locations into the device.

Between Nov. 26 and 28, 2008, 10 attackers trained by Lashkar carried out multiple assaults with firearms, grenades and improvised explosive devices against multiple targets in Mumbai, including the Taj Mahal and Oberoi hotels, the Leopold Caf&#233;, the Chabad House and the Chhatrapati Shivaji Terminus train station, each of which Headley had scouted in advance, killing approximately 164 victims and wounding hundreds more.

In March 2009, Headley made a sixth trip to India to conduct additional surveillance, including of the National Defense College in Delhi, and of Chabad Houses in several cities.

Regarding the Denmark terror plot, Headley admitted and testified that in early November 2008, he was instructed by a Lashkar member in Pakistan, to conduct surveillance of the Copenhagen and Aarhus offices of the Danish newspaper Morgenavisen Jyllands-Posten in preparation for an attack in retaliation for the newspaper's publication of cartoons depicting the Prophet Mohammed.  After this meeting, Headley informed co-defendant Abdur Rehman Hashim Syed (Abdur Rehman), also known as "Pasha," of his assignment.  Abdur Rehman told Headley words to the effect that if Lashkar did not go through with the attack, Abdur Rehman knew someone who would.  Although not identified by name at the time, Headley later learned this individual was co-defendant Ilyas Kashmiri.  Abdur Rehman previously told Headley that he was working with Kashmiri and that Kashmiri was in direct contact with a senior leader of Al Qaeda.

While in Chicago in late December 2008 and early January 2009, Headley exchanged emails with Abdur Rehman to continue planning for the attack and to coordinate his travel to Denmark to conduct surveillance.   In January 2009, at Lashkar's direction, Headley traveled from Chicago to Copenhagen to conduct surveillance of the Jyllands-Posten newspaper offices in Copenhagen and Aarhus and scouted and videotaped the surrounding areas.

In late January 2009, Headley met separately with Abdur Rehman and a Lashkar member in Pakistan, discussed the planned attack on the newspaper, and provided them with videos of his surveillance.  About the same time, Abdur Rehman provided Headley a video produced by the media wing of Al Qaeda in approximately August 2008, which claimed credit for the June 2008 attack on the Danish embassy in Islamabad, Pakistan, and called for further attacks against Danish interests to avenge the publication of the offending cartoons.

In February 2009, Headley and Abdur Rehman met with Kashmiri in the Waziristan region of Pakistan, where they discussed the video surveillance and ways to carry out the attack.  Kashmiri told Headley that he could provide manpower for the operation and that Lashkar's participation was not necessary.  In March 2009, a Lashkar member advised Headley that Lashkar put the newspaper attack on hold because of pressure resulting from the Mumbai attacks.  In May 2009, Headley and Abdur Rehman again met with Kashmiri in Waziristan.  Kashmiri told Headley to meet with a European contact who could provide Headley with money, weapons and manpower for the Denmark attack, and relate Kashmiri's instructions that this should be a suicide attack and the attackers should prepare martyrdom videos beforehand.  Kashmiri also stated that the attackers should behead captives and throw their heads on to the street in Copenhagen to heighten the response from Danish authorities, and added that the "elders," whom Headley understood to be Al Qaeda leadership, wanted the attack to happen as soon as possible.

In late July and early August 2009, Headley traveled from Chicago to various places in Europe, and met with and attempted to obtain assistance from Kashmiri's contacts and, while in Copenhagen, he made approximately 13 additional surveillance videos.  When he returned to the United States on Aug. 5, 2009, Headley falsely told a U.S. Customs and Border Protection inspector in Atlanta that he had visited Europe for business reasons.  On Oct. 3, 2009, Headley was arrested at O'Hare International Airport in Chicago, intending ultimately to travel to Pakistan to deliver the approximately 13 surveillance videos to Abdur Rehman and Kashmiri.

One of Headley's co-defendants, Tahawwur Rana, 52, of Chicago, was sentenced last week to 14 years in prison for conspiracy to provide material support to the Denmark terror plot and providing material support to Lashkar.  Headley testified for the government at Rana's trial in June 2011.

Promoted
Listen to the latest songs, only on JioSaavn.com
The government is being represented by Assistant U.S. Attorneys Daniel Collins and Sarah E. Streicker, with assistance from the Counterterrorism Section of the Justice Department's National Security Division.  Federal prosecutors in Los Angeles have worked on a broader investigation of the Mumbai attacks.  The investigation was conducted by the Chicago Joint Terrorism Task Force, led by the Chicago Office of the Federal Bureau of Investigation, with assistance from FBI offices in Los Angeles, Philadelphia, and Washington, D.C., as well as both U.S. Customs and Border Protection and the U.S. Immigration and Customs Enforcement's  (ICE) Homeland Security Investigations (HSI).