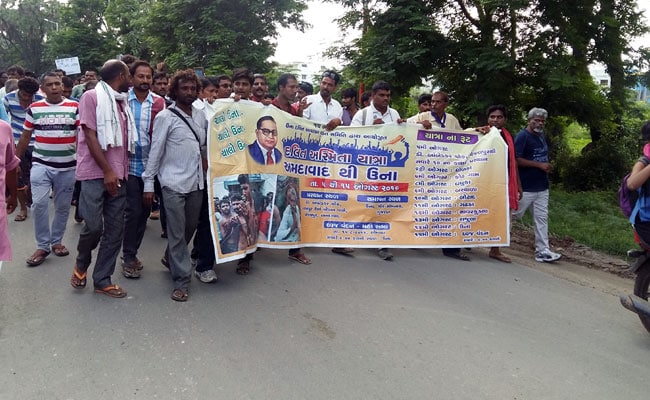 Dalits in Gujarat had recently organised marches to protest against atrocities committed on them.

Rajkot, Gujarat: Two Dalit men were thrashed allegedly by a group of self-styled cow vigilantes for refusing to dispose the carcass of a calf in a village in Gujarat's Saurashtra region.

The victims, Nagji Rathod and Mayabhai Rathod of Mandal village were beaten up allegedly by seven men after they told them that they have stopped clearing animal carcasses in response to a state-wide call by Dalit activists against doing that work, police said. The victims were rushed to a hospital in Mahuva town.

Acting swiftly on a complaint, police arrested village head Atabhai Ahir, who allegedly led the vigilantes. Two of the attackers are yet to be identified.

All the accused have been charged under the Indian Penal Code and The Scheduled Castes and Scheduled Tribes (Prevention of Atrocities) Act.

"We have lodged a complaint against the seven accused and the probe has now been handed over to the Deputy Superintendent of Police at Rajula," Police Inspector VM Zala told IANS.

"We are being constantly harassed by villagers for no reason. Our life has become miserable as people are trying to attack us economically," Mr Rathod said. Sunday's assault was the second attack on the Rathod family.

In May, Soma Rathod's son Premji Rathod was among seven Dalits who were allegedly thrashed by about 20 vigilantes in Rajula. The attackers had filmed the entire incident.

Soma Rathod owns a unit in the village where bones of dead animals are crushed and sent to Godhra for further processing.