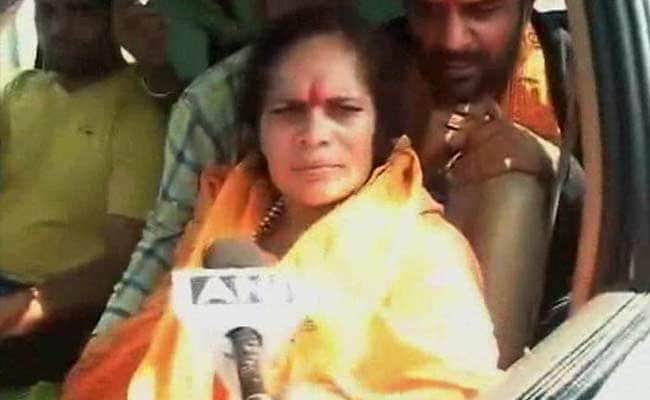 Vishwa Hindu Parishad leader, Sadhvi Prachi alleged that there was a conspiracy behind her not being allowed to enter the village in Dadri.

Dadri, Uttar Pradesh: The state administration remained firm over their decision not to allow any outsider in Dadri's Bishada village, denying entry to Vishwa Hindu Parishad leader, Sadhvi Prachi. Prohibitory orders have been imposed after a 52-year-old Muslim was killed in a mob attack for allegedly eating beef.

Ms Prachi alleged that there was a conspiracy behind her not being allowed to enter the village.

"I wanted to meet families of Jay Prakash and Rahul Yadav but I was denied entry. I had requested the SDM in this respect. Owaisi, who comes from Hyderabad can meet, why I am not allowed entry? This is a conspiracy," she said.

A resident of Bishada, 24-year-old Jay Prakash was found dead under mysterious circumstances yesterday while Rahul Yadav suffered an alleged bullet injury during protests against the administration after the mob attack.

Talking to reporters, Ms Prachi also targeted Uttar Pradesh Minister Azam Khan over his letter to the United Nations seeking its intervention to look into the miseries of minorities in India.

The right wing leader also demanded compensation of Rs 50 lakh each for the families of Mr Yadav and Jay Prakash. "Prakash was tortured to the extent that he committed suicide," she alleged.

Undeterred, Ms Prachi asserted that she will "once again" try to meet the families of Jay Prakash and Mr Yadav.