The meeting was called by Sanjay Rana, the BJP politician whose son is in jail for Mohd Akhlaq's murder.

Dadri, Uttar Pradesh: Ignoring police orders, a group of BJP and Shiv Sena politicians led a village meeting or panchayat demanding action against the family of Mohammed Akhlaq, who was lynched to death in September over accusations that his family was eating beef in their home.

The threats were blatant. "We give them 20 days. If there is no action, even I can't guarantee that I can control this public anger," said the BJP's Sanjay Rana, whose son, Vishal, has been arrested for Mr Akhlaq's murder.

The police this morning said that the panchayat would not be allowed because it could incite a new round of communal tension in Dadri, just 50 km from Delhi. 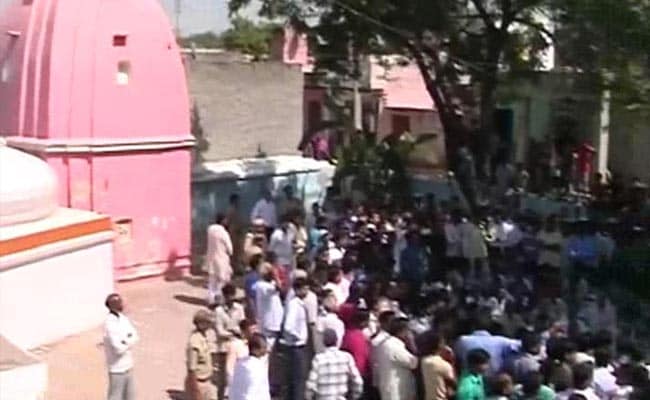 But locals and Mr Rana said they would not be silenced and convened at the same temple where a priest had used the loudspeaker to rouse the village into action, after which a mob headed for Mr Akhlaq's home.

"People have been yelling that there has been cow slaughtering so something should also be done in this regard," Mr Rana said this morning while stressing, "there is no tension in the village."

The police said that it allowed the panchayat as a way of keeping the peace.

"I appeal to all, please maintain our communal harmony. We just want truth to be revealed, and we want peace," Jaan Mohammad, Mr Akhlaq's brother told NDTV.

Uttar Pradesh votes next year, and the Dadri lynching exemplifies divisive politics, say opponents of the BJP, which in turn says Mr Akhlaq's family is being given undue protection by the state government despite evidence of its wrongdoing.

Last week, a lab report said that meat collected from his home was beef. The report contradicted an earlier document which stated the sample was goat meat. Villagers and BJP leaders want Mr Akhlaq's family now to be charged with cow slaughter.

Chief Minister Akhilesh Yadav has questioned the authority of the new report submitted by the police in court, and has stressed that what is important is punishing a mob that killed a man, irrespective of its motive.

Bisada, home to about 400 Hindu and 25 Muslim families, had a long tradition of unity till the killing of Mr Akhlaq.