Schools, colleges and anganwadi centres in four districts of Odisha have been closed due to cyclone Titli. 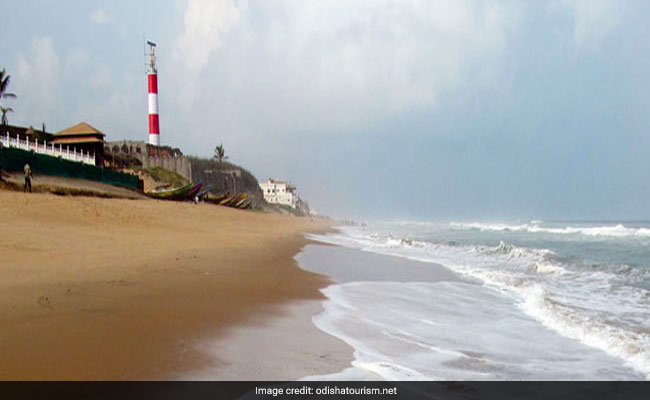 Cyclone Titli is expected to make landfall in Odisha at around 6 am on Thursday. Five coastal districts have been evacuated, with residents being moved to safety after the storm intensified. Schools, colleges and anganwadi centres in four districts of Odisha have been closed. Cyclone Titli will make landfall between Gopalpur in Odisha and Kalingapatanam in Andhra Pradesh.

Here are the updates on Cyclone Titli:

Oct 11, 2018 05:14 (IST)
Centre very close to the coast. It will cross North Andhra Pradesh and South Odisha coast southwest of Gopalpur within the next 1-2 hours as a very severe cyclonic storm: IMD bulletin
Oct 11, 2018 03:34 (IST)
Cyclone Titli will cross North Andhra Pradesh and South Odisha coast with next 3-4 hours. Wall cloud region of cyclone is entering into the coast. Gopalpur reported 107 km/hour surface wind speed at 0230 hours: IMD
Oct 11, 2018 01:43 (IST)
Titli Cyclone is 120 km away from Gopalpur. It is moving at a speed of 11 km/hour and will reach Gopalpur between 5:30-11:30 am today. Heavy rainfall is expected. Our port warning is highest at 10. Maximum speed will be 150 km/hour: Umashankar Das,India Meteorological Department
Oct 10, 2018 22:33 (IST)
Authorities in Bangladesh have told local officials in the country's southern coastal region to begin preparations in case Cyclone Titli hits the area.
Oct 10, 2018 21:57 (IST)
3 lakh people have been evacuated from coastal areas in Odisha, Chief Minister Naveen Patnaik said. "If required, more people will be evacuated to safer places," he said
Oct 10, 2018 19:56 (IST)
East coast Railway has cancelled at least eight trains and suspended services between Khurda Road in odisha and Vizianagaram in Andhra Pradesh after 10 PM tonight till further advice in view of Cyclone Titli
Oct 10, 2018 19:55 (IST)
Tourists at seaside resort towns of Digha, Sankarpur, Mandarmani and other places along the coast in the state have been advised "not to undergo any seawater-bound activities during this period," the Met department said.
Oct 10, 2018 19:55 (IST)
Under the impact of Cyclone Titli, coastal and over-land areas of East and West Midnapore, Jhargram, South and North 24 Parganas districts in Bengal will experience squally wind, with speed reaching up to 60 kmph from today evening onwards, the met department said
Oct 10, 2018 19:20 (IST)
"The very severe cyclonic storm will continue till 11.30 am on October 11 and the wind intensity is going to be 140-150 kmph, gusting to 165 kmph. The storm will cross near Srikakulam of north coastal Andhra Pradesh," the SDMA said.
Oct 10, 2018 19:19 (IST)
A high alert was sounded today in the north coastal districts in Andhra Pradesh today, with Cyclone Titli likely to cause heavy rains and destructions, news agency PTI reported.
Fishermen have been warned not to venture into the sea as gale speed winds are expectected, the State Disaster Management Authority said.
Oct 10, 2018 19:09 (IST) 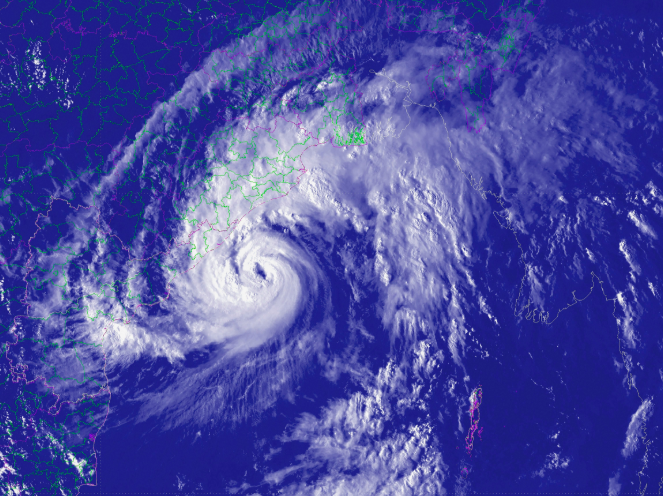 In this image released by the Indian Meteriological Department (IMD), a depression is seen over Bay of Bengal on Wednesday. Cyclone Titli intensified into a severe cyclonic storm on Wednesday and is moving towards the Odisha-Andhra Pradesh coast, triggering rainfall in several parts of Odisha, according to the IMD. (PTI)
Oct 10, 2018 19:06 (IST)
Due to cyclone Titli, the Railway Recruitment Board (RRB) exam that was scheduled on October 11 and 12 in Bhubaneswar, Cuttack, Dhenkanal, Sambalpur, Khurda and Berhamapur has been cancelled. Revised dates and place will be sent to candidates on their mobile number and email, the chairman of the RRB in Bhubaneshwar said, news agency ANI reported.
Oct 10, 2018 19:05 (IST)
14 NDRF teams have been deployed in Odisha's Balasore, Sambhalpur, Gajapati, Nayagarh, Puri, Jajpur, Kendrapra, Bhadrak, Jagatsinghpur, Ganjam and Bhubaneshwar, while four teams have been deployed in Andhra Pradesh's Visakhapatnam, Srikakulam and Vijaynagram
Oct 10, 2018 18:11 (IST)
However, in good news for the residents of the state, good weather is expected during the five days of Durga Puja, which will be observed from October 15 to October 19
Oct 10, 2018 18:10 (IST)
According to the MET office, heavy to very heavy rainfall is on the cards for Kolkata and Howrah on October 12 and 13.
Oct 10, 2018 18:10 (IST)
The met department in Kolkata has warned of heavy rainfall in six districts in south Bengal for the next four days. "Due to the cyclone, there will be moderate to heavy rainfall in the south Bengal districts from October 10 to 13, while the coastal districts like East and West Midnapore, North and South 24 Parganas, Hoogly and Howrah are likely to receive heavy rainfall," an official said.
Oct 10, 2018 17:35 (IST)
So far, 10 teams of the National Disaster Response Force and eight teams of the Odisha Disaster Rapid Action Force have been deployed in various coastal and interior districts of the state, Mr Padhi said
Oct 10, 2018 17:34 (IST)
The students' union poll across the state scheduled for October 11 has been cancelled, Odisha Chief Secretary Aditya Prasad Padhi said
Oct 10, 2018 17:33 (IST)
Odisha Chief Minister Naveen Patnaik directed the collectors of these five districts to ensure 'zero casualty' after the Met office said Titli has been upgraded to the category of "severe cyclonic storm"
Oct 10, 2018 17:33 (IST)
The Odisha government has ordered evacuation of the Ganjam, Puri, Khurda, Jagatsinghpur and Kendrapara districts. Cyclone Titli is expected to pass through these districts after making landfall tomorrow morning
Cyclone TitliOdisha