With several parts of Mumbai reporting waterlogging and heavy rainfall, the Maharashtra government has advised citizens to refrain from stepping out 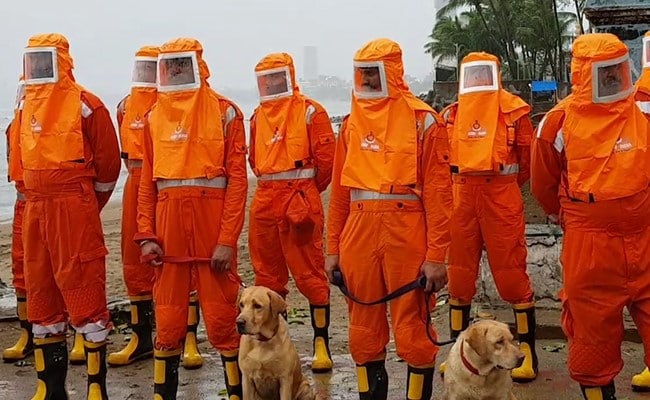 Cyclone Tauktae: Over 100 rescue teams are on duty.

Parts of Mumbai have begun to face the brunt of the fast-approaching cyclonic storm Tauktae. High-speed winds and heavy rainfall hit the city and its surrounding areas, causing the state administration to issue warnings, asking people to stay indoors. Given the situation, the Mumbai airport was shut till 4 pm, while the Bandra-Worli sea-link was closed for traffic earlier in the morning. The “extremely severe cyclonic storm” is expected to reach the Gujarat coast late this evening, weather office has said.

In anticipation of the heavy rain and subsequent landfall, over 1.5 lakh people are being shifted from low-lying coastal areas in Gujarat. Additionally, 54 teams of the NDRF and SDRF were deployed in the state on Sunday following the India Meteorological Department warning about the storm.

Better still, just stay indoors unless it's an unavoidable emergency#CycloneTaukte#TrafficUpdateMumbaihttps://t.co/70L6Zzjrvcpic.twitter.com/bfhh7REj0T

In light of these developments, here are certain helpline numbers that you can use in case of emergencies.

The National Disaster Response Force can be contacted on the helpline number: +91-9711077372

If you are in Kerala and in need of help, you can contact Disaster Management Authority's helpline numbers: 1077 (Collectorates), 1070 (State Control Room).

In addition to this, several official departments such as Mumbai Police are also accessible on social media platforms such as Twitter and Facebook.

Maharashtra Chief Minister Uddhav Thackeray this morning said around 12,000 people have been evacuated. He added that the state ensured power and oxygen for hospitals and that patients undergoing treatment at COVID and non-COVID facilities in the coastal areas had been relocated.

CM Uddhav Balasaheb Thackeray is closely monitoring the #CycloneTauktae situation in the State.

So far, 12,420 citizens were relocated to safer places from the coastal areas.

Mumbai, Thane & Palghar districts are on orange alert while Raigad district is on red alert.

In addition to over 100 NDRF teams across the country, quick response medical and public health teams, with stocks of emergency medicines, have also been sent into the field. Moreover, the Indian Air Force has deployed two C-130J and an An-32 aircraft to transport 167 NDRF personnel and 16.5 tonnes of equipment from Kolkata to Ahmedabad.

The Navy, which was involved in search and rescue ops in Kerala on Sunday, is currently on standby in Gujarat.