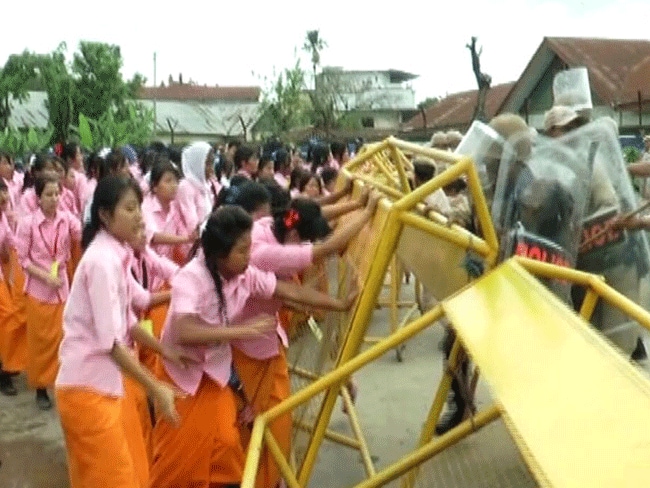 Imphal, Manipur: Curfew has been extended for the fourth consecutive day in Imphal today, following violent clashes between students and the police in which a Class 9 student was killed on Wednesday.

Manipur's capital city was witness to protests over the implementation of the Inner Line Permit system which regulates the entry of outsiders - both Indians and Foreigners - into the state.

Though officials relaxed the curfew for five hours this morning, but the situation in and around Greater Imphal area remains volatile in the north eastern state.

Despite the curfew, protests have been out on the streets in the last few days, some clashes between protestors and police has been reported at some places. The Manipur Police say they are doing their best to prevent another major flare up, but there will be no complete relaxation of curfew till the situation goes back to normal.

The organisation leading the protests, Joint Committee of the Inner Line Permit (JCILP) draws its main support from school going students. They claim that the current laws remain lax, and have led to outsiders taking away most employment opportunities in the state.

Earlier in March, the government had passed a bill making it mandatory for all outsiders to register themselves with authorities upon entering the state.

The protestors allege that the migrant population is becoming the same strength in numbers as the Manipuris and they want nothing less than the permit system to be imposed.

Currently the permit system is in place in the other north-eastern states of Nagaland and Arunachal Pradesh and Mizoram.