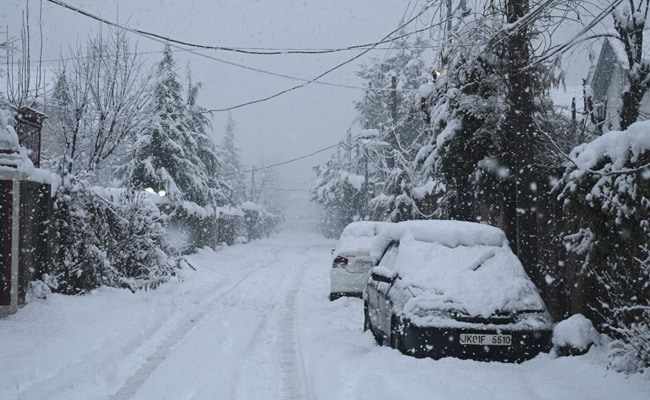 A sub inspector of Central Reserve Police Force (CRPF) and a woman were killed in heavy snowfall in Kashmir that damaged over 100 structures, mostly residential houses.

Accumulation of heavy snow on rooftops damaged over two dozen houses in Srinagar city. The chilling moment of collapse of some of the residential houses was captured on camera.

Officials said a CRPF officer deployed at Srinagar's Hazratbal died after a shed collapsed. A woman was killed in Kupwara's Trehgam area after she came under a snow avalanche.

Officials said damage assessment is being carried out and it will take a couple of days to get a clear picture about the number of houses that have been damaged by snow.

While weather conditions have improved Wednesday afternoon, heavy snowfall in the last four days have caused immense hardship to the locals. The Union Territory administration has come under flak for its failure to clear snow and restore services.

On Tuesday, the administration ordered rationing of fuel due to closure of Srinagar -Jammu highway. The opposition said this only exposes the inadequate stock position in Kashmir.

Normally, ahead of winters, the administration stocks up on essential supplies, including fuel that can last for at least two months. This is for the first time that only after three days of snowfall, the UT administration ordered the rationing of fuel in Kashmir.