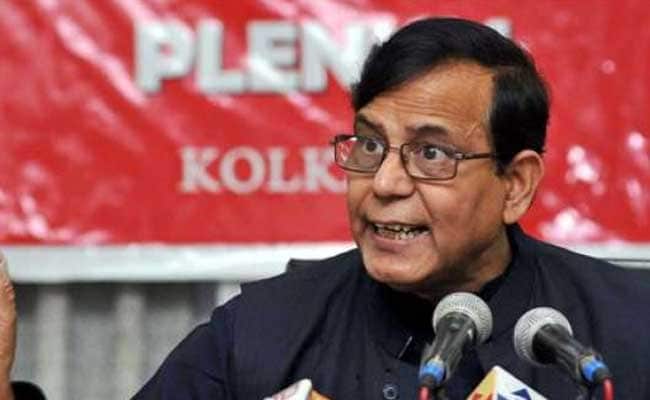 Mohammed Salim, CPI(M) Deputy Leader in the Lok Sabha, said that the assets accumulated by the relatives of the chief minister and people close to her would be auctioned. (File photo)

Kolkata: The CPI(M), if voted to power in the Assembly election in West Bengal, would conduct a probe into alleged accumulation of assets by the relatives of Trinamool Congress president and Chief Minister Mamata Banerjee, party lawmaker Mohammed Salim today said.

Mr Salim, CPI(M) Deputy Leader in the Lok Sabha, said that the assets accumulated by the relatives of the chief minister and people close to her would be auctioned and the money would be distributed among the poor.

"We will recover crores of money accumulated by duping the poor...We know that they (TMC) are using ill-gotten money in the media also...We will probe everything," Mr Salim said at the party office in Kolkata while replying to a question if the party would investigate the Trinamool's alleged links with the Saradha scam.

He also hit out at the BJP for keeping mum over the sting operation.

He alleged that there was a "secret understanding" between the BJP government at the Centre and the Trinamool-led state government, which has "influenced" the investigation into the Saradha scam. That was the reason also why no "FIR" was lodged in the sting operation.

"This is for the first time that MPs from West Bengal have been caught in such an act on camera," he said.

He wondered why no FIR was lodged against them and why there was no probe ordered. "This is because there has been a secret understanding between the BJP and the TMC," Mr Salim said.

He also questioned, "On what basis Mamata Banerjee is calling it a doctored video...There are softwares to detect if it is at all doctored. Actually, she does not want the truth to come out."

The CPI(M) leader also wanted to know why no action was taken against former Burdwan SP SMH Meerza who was caught on the sting video purportedly taking wads of currency notes.

He said since Mr Meerza is an IPS officer, he had asked Union Home Minister Rajnath Singh to take action against him since his name cropped up in the sting operation.

"He (Meerza) is an IPS officer. He is into a service and collecting money for a particular political party. How was he doing that? I have personally spoken to BJP's Siddharth Nath Singh also on this matter but they are still mum," Mr Salim said.