Police stations in Aligarh have begun sheltering stray cows after a directive from district police chief.

Cows in Uttar Pradesh will have government-built shelters across the state, but the public will bear the cost in the form of a "cow welfare" cess on excise and other departments.

After a week of protests across western UP over a stray cattle menace, a cabinet meeting chaired by Chief Minister Yogi Adityanath decided to impose a 0.5 percent cess on excise items, which could include alcohol.

The same cess will be charged on toll collected by government agencies, for example on the Agra-Lucknow expressway road built and operated by a state government agency. The government has also doubled the one percent cess imposed on mandi parishads across the state.

No estimate has been offered on how much money the government hopes to make by collecting the cess, but sources in the government said it will help them tackle the problem of stray cattle across villages in UP. For cow shelters, the government has also sanctioned Rs 100 crore to local bodies.

In the last week, people in at least two villages in western Uttar Pradesh's Aligarh and Firozabad districts rounded up stray cattle and locked them in government schools in their areas, refusing to let classes function until the administration did something about the animals.

In a bizarre move in Aligarh, police stations have started sheltering stray cows after a directive from the district police chief. 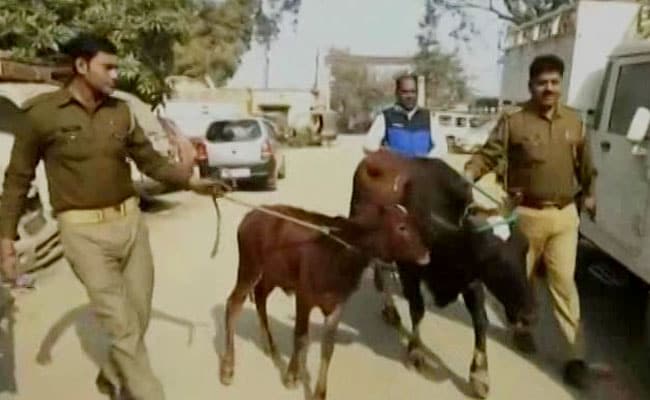 "The government is already tackling the issue and many sheds have been constructed already across Aligarh. But law and order problems are also being created. So it was suggested to me by fellow police officers that every police station should also start taking care of cows and that will send a positive message, so this is what we have started doing," said AK Sahni, Aligarh's police chief.

Since the Yogi Adityanath government took charge in UP last year, it claims to have come down hard on cow smuggling and illegal slaughter-houses. While there are no figures available, anecdotal evidence from various districts suggests ageing cattle are being abandoned by villagers across the state.