"Now, the country is correcting the mistake committed decades ago," PM Moditold a gathering, comprising tribals and others, at the memorial. 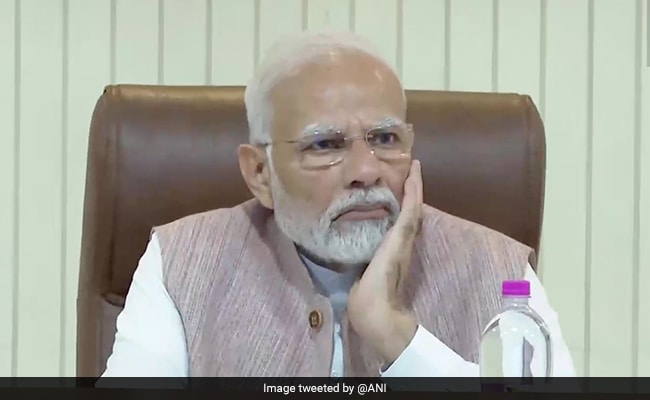 "Now, the country is correcting the mistake committed decades ago," PM Modisaid. (File)

Prime Minister Narendra Modi Tuesday asked Rajasthan and neighbouring state governments to draw a roadmap for developing Mangarh Dham, a memorial to a tribal uprising against the British which he said has not been given its due place in history.

While the event was on, the Press Information Bureau (PIB) tweeted that the prime minister has declared the dham a national monument. Later in the day, the tweet was removed.

"Over 1,500 tribals were killed in firing by the British on November 17, 1913. But unfortunately, in the history written post-Independence, this was not given its due place.

"Now, the country is correcting the mistake committed decades ago," PM Modi told a gathering, comprising tribals and others, at the memorial.

Rajasthan Chief Minister Ashok Gehlot, who shared the dais with his Madhya Pradesh counterpart Shivraj Singh Chouhan and Gujarat's Bhupendra Patel, had been demanding this status for the dham.

Remembering Govind Guru, who had led the 1913 uprising, PM Modi said Rajasthan, Gujarat, Madhya Pradesh and Maharashtra together under the leadership of the Centre can develop the dham more so that the tribal leader's place can get global identity.

The event is being seen as the BJP's outreach to the tribal community ahead of the Assembly polls in Gujarat in the next few weeks and in Rajasthan and Madhya Pradesh next year.

In pre-Independent India, Bhils and other tribes engaged in a long stand-off with the British, with over 1.5 lakh tribals rallying to the Mangarh Hill on November 17, 1913, under the leadership of Govind Guru, according to an official release.

The British opened fire at this gathering which is now known as the Mangarh Massacre, it said.

Modi's visit is likely to leave an impact on assembly constituencies in northern parts of Gujarat where election is going to be held soon.

Of these, 21 are held by the BJP, 11 by the Congress, two by the Bhartiya Tribal Party and three by Independents.

Highlighting the contribution of tribals to the freedom struggle, the prime minister said the Centre is working with a clear policy for the development of tribals across the country, from Rajasthan and Gujarat to the Northeast.

Water, electricity and health, among other facilities, are being provided and they are being linked to employment opportunities while forest wealth is also being protected, PM Modi said.

Tribals had started the freedom struggle even before the Revolt of 1857, he said, adding the community has a rich history of sacrifice in the freedom movement.

Sharing the dais with the chief ministers, PM Modi also said that a discussion about the comprehensive development of Mangarh Dham has been held here.

He said, "All of us have a strong desire for the magnificent expansion of Mangarh Dham and for this, Rajasthan, Gujarat, Madhya Pradesh and Maharashtra need to work together".

"It is my request to all the four state governments to hold a detailed discussion in this direction, prepare a roadmap so that Govind Guru's place too can create its identity in the whole world," PM Modi said.

The prime minister also spoke about the gauge conversion of the 300-km rail track between Ahmedabad-Udaipur and said tourism in Rajasthan will benefit from this.

"This will also create new employment opportunities for the youth," he said.

On the occasion, Gehlot said he was happy that recently the prime minister spoke to the chief secretaries of Rajasthan, Gujarat and Madhya Pradesh about the dham.

"This means that it was on your mind and you thought you should have information about it before your visit. I urge you again to declare Mangarh Dham a national monument," he said.

The prime minister said he believes that the development of the dham will make this area "an awakened place for the inspiration for the new generation".

Some may call it a national monument or any name can be given to it, but the central government and tribal communities in all these four states have a direct connection to the dham, Modi said.

"These four states and the Government of India can take it to a new height and in that direction, the central government is fully committed," he said.

On Govind Guru, Modi termed him a social reformer, revolutionary, saint and religious leader, saying he not only opened a front against the atrocities under British rule but was also against social evils.

Govind Guru was not a king from a princely state yet he was a hero to lakhs of tribal people. Though he lost his family, he never lost his courage, the prime minister said.

Modi said that developmental works were carried out in the portion of the Mangarh Dham which falls in Gujarat when he was the chief minister.

This helped in spreading the teachings of Govind Guru and also improving the quality of life of the people, he said.

The PM said earlier the entire area was barren land but was transformed with greenery after he appealed to everyone through the Van Mahotsav platform.

"I thank the people of the region for selflessly working for the campaign," the prime minister said.