They said eight of them have already been discharged and 51 are housed in these non-air conditioned coaches, modified to work as Covid care cantres. 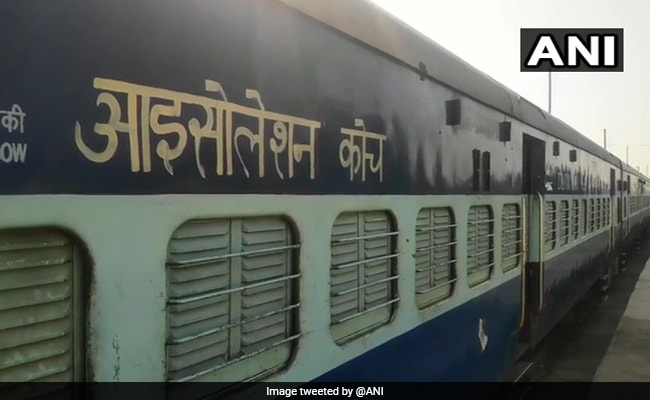 The admitted cases include women and children, the officials said. (Representational)

They said eight of them have already been discharged and 51 are housed in these non-air conditioned coaches, modified to work as Covid care cantres.

The admitted cases include women and children, the officials said.

On June 20, 42 patients were admitted to the isolation coaches at Mau railway station, while 17 the next day, they added.

As per official figures, Uttar Pradesh has reported over 18,000 coronavirus cases, while the number of deaths due to the disease stands at 569.

The coaches are laced with basic amenities that a patient would require -- handheld showers, mosquito nets, bio-toilets, power sockets, oxygen cylinders and more.

However, one of the major challenges for the Railways is to keep the temperature inside these "metal boxes" down so that patient can feel comfortable during the summer heat, when mercury may go several notches beyond normal levels.

At Mau railway station, officials have kept industrial size pedestal fans and stacks of hay ready to be deployed for cross-ventilation and cover the roofs of the isolation coaches if the temperatures soar.

The Railways is now experimenting with a variety of options to bring down the temperature inside the coaches. These include bamboo blinds on windows and bubble-wrap on the roof as well as heat-resistant coating and portable coolers.

It has also used cover-sheets over the coaches to keep the heat out and the interiors cool.

These measures will, however, bring the inside temperature down by up up to one degree Celsius only, an official said.

The Northern Railways has also coated the roof of isolation coaches with heat-reflective paint as a trial and found that the temperature inside can be reduced up to 2.2 degrees Celsius using this method.

Trials are being planned for another coating developed in association with IIT-Bombay.

A trial has been carried out by placing portable coolers inside the coaches as well, the Railways said, adding that temperature reduction of up to three degrees Celsius was achieved using them.

While efforts are underway to cool things down, officials said they are praying for rain.

As of now, the national transporter has deployed a total of 960 "COVID Care" coaches in five states -- Delhi, Uttar Pradesh, Madhya Pradesh, Telangana and Andhra Pradesh.

In an effort to augment the government's efforts to build infrastructure to deal with the spread of COVID-19, the Railways has converted 5,321 non-AC sleeper class ICF (older design) coaches and developed them into COVID Care Level 1 centres for patients with mild symptoms or those suspected to have the infection.