As Covid Rises, India's 'R' Factor Highest In A Year. What It Means

The 'R' factor - a statistic used worldwide to track, and potentially, control the spread of the virus - is a measure of how many people are being infected by one person

Over 131,000 new Covid cases have been reported in India in the past three days (File)

Concern over an alarming increase in new coronavirus cases in India - 131,750 over the past 72 hours - was underlined Monday by a spike in the 'R', or 'reproduction rate', of the virus, which has jumped to 1.32 - the highest since April last year, when there were fewer than 27,000 cases.

A 'R' of 2.0 indicates that one person with COVID-19 will, on average, infect two others. Each of those two will infect two more (spreading the disease to an average of four people) and so on.

In a pandemic situation the ideal 'R' target is below 1.0, which ensures that the virus will eventually stop spreading because it cannot infect enough people to sustain the outbreak.

In India the 'R' rate was below 1.0 for several weeks starting late November last year, which was welcome news as it forecasted a rapid decline in new Covid cases. 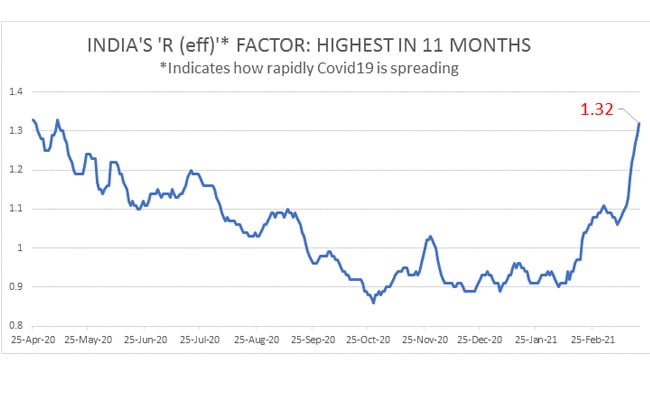 The 'R' rate in India touched 1.32 Monday - the highest since April last year

And that was exactly what happened, with daily numbers dropping from over 90,000 in September last year to around 10,000 in the first two weeks of February this year.

As of Monday morning, however, the number of active cases in India has shot up to nearly 334,000, with a 150 per cent spike recorded in the past week. Around 132,000 of these new cases have been detected in the past three days, with over 40,000 reported in each 24-hour period.

The spike is the result of new cases in a handful of states, with Maharashtra - the worst-affected - leading the way. By Monday morning the state had over 211,000 active cases, with over 30,000 detected in a 24-hour period ending Sunday night. State capital Mumbai, the worst-affected metro city, has seen a similarly alarming surge, with over 3,000 new cases in each of the past two days.

National capital Delhi has also reported an increase - on Saturday over 800 new infections were reported in a 24-hour period for the first time this year.

The centre, and concerned state governments, have flagged laxity in following Covid protocols as one of the main reasons for the spike in cases. Governments have stressed on the need to follow basic rules - wearing face masks and maintaining social distance, and frequent washing of hands.

Mutated versions of the coronavirus - such as those that have emerged from the United Kingdom, Brazil and South Africa - are also a concern, with some proving far more infectious than others.

The 'R' rate of the coronavirus - which will determine how quickly new coronavirus cases could spread in India - is affected by factors including how infectious the virus and population density.

The 'R' rate can also be affected by how quickly active caseloads are reduced - either by recovery of infected persons or deaths. In this regard it is also critical that a significant proportion of the population gets at least one dose of the Covid vaccine, as this should limit the spread of the virus.

India is presently in the second phase of its vaccination drive, in which people over 60 and those above 45 but with certain illnesses can get either one of the Covishield or Covaxin shots.

Over 4.5 crore vaccines have been administered since the drive began on January 16, with the centre hoping to vaccinate around 30 crore people in this phase alone.