Karnataka To Slow Down For A Week Amid Coronavirus Scare

In Karnataka, five people have tested positive, including a Google employee.

After the death of a 76-year-old in north Karnataka's Kalaburagi district on Tuesday due to coronavirus, the first death due to the illness in India, the state administration has decided to step up measures to curb the spread of the pandemic.

In the last two weeks, India has witnessed a sharp jump in cases of coronavirus with at least 81 people infected across the country. In Karnataka, five people have tested positive, including a Google employee.

"We have discussed in detail with all our experts and Devi Shetty and other important persons...Don't panic as the disease is manageable. For the next one week - no malls, no cinema theatres, no pubs, no exhibitions, no sports events, no marriage events," Karnataka Chief Minister BS Yediyurappa told NDTV.

"Exams will go on. We are not going to stop any examination. Government office will work as usual," he added.

To support the offer for help from the government, private sector has effectively shown interest in joining the cause.

Head of Infosys Foundation Sudha Murty has said the Foundation along with Dr Devi Shetty of Narayana Hrudayalaya hospitals are ready to help equip a government hospitals specifically to deal with patients affected by the virus. 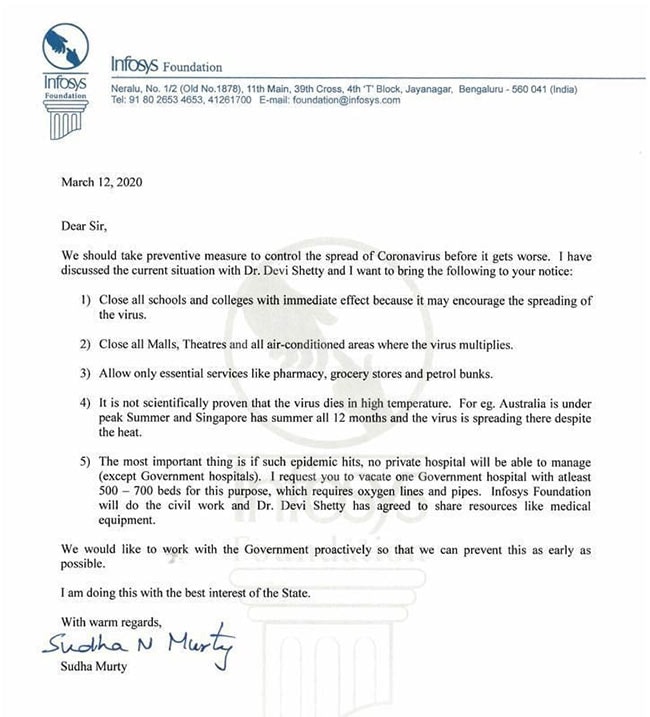 Head of Infosys Foundation Sudha Murty has said along with the Foundation, hospitals are ready to help equip a government hospitals specifically to deal with patients affected by the virus.

"Enforcing will create more problem. Appeal by prominent persons from the medical field or from people who have got a wide following and whose words are widely respected - such people should appeal to people in general to postpone large gathering where there is a likelihood of infection. It should be a people led movement to protect ourselves rather than an authority led movement," said Bhaskar Rao, Bengaluru Police Commissioner.

People in Karnataka have been informed that there will be big changes in the week ahead.

Mr Yediyurappa after a discussion with senior officers from different departments and Dr. Devi Shetty has urged for cooperation from people across the state.

Government operated schools and hostels have been recommended to take precautions, while offices, examinations and assembly sessions are to be conducted without disruptions. Schools and colleges have been closed down for a week.

Guidelines will be issued on how to control the spread of the disease and all private hospitals should compulsorily report to the health department if they come across any person they suspect to be infected with the virus. Private hospitals have already been instructed about it.

In addition to this, all state private hospitals have been ordered to notify all coronavirus cases being treated in their facilities.

The government is also forming a committee to coordinate with private hospitals. Additional laboratories will also be established.

Indian Medical Association and Private Hospitals Association have extended their full cooperation to curb the spread of COVID-19 infection.

Travellers from overseas must report to the health department and their families must be isolated at their home for 14 days.

Malls, film theatres, night clubs will be closed for a week from March 14 and summer camps, meetings, sports events, symposiums to remain suspended. IT companies have been requested to instruct their employees to work from home.

People at social gatherings have been advised to maintain a minimum of 6 feet distance between each other.