Delhi-Gurgaon Border: A similar traffic jam broke out last week the Haryana government re-sealed all borders amid concerns over the rising number of COVID-19 cases Massive traffic jams were reported from the Delhi-Gurgaon border on Monday morning, hours after it was supposed to have opened to non-essential traffic in line with the centre's revised coronavirus lockdown guidelines.

"State government announced yesterday that inter-state travel is allowed, but today they are not allowing us as we do not have any movement pass," a frustrated commuter was quoted by news agency ANI.

On Saturday the Home Ministry, while announcing an extension of the nationwide coronavirus lockdown to June 30, also announced relaxations for non-containment zones, one of which was that inter-state travel would now be permitted and no separate permission or e-permit was needed for this.

A day after that Haryana Chief Minister Manohar Lal Khattar held a late-night meeting with senior ministers and officials, including state Home Minister Anil Vij who, last month, lashed out at those crossing the border as "corona carriers" and has repeatedly called for closure of the border.A similar traffic jam broke out last week the Haryana government re-sealed all borders amid concerns over the rising number of COVID-19 cases. However, chaos prevailed as it appeared cars were being allowed to pass unchecked, while those on foot were stopped. 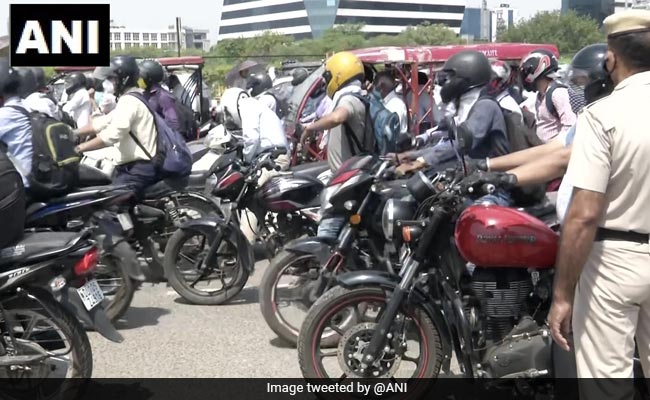 A group of people on cycles, mostly workers, blocked the road for some time, forcing deployment of police. An hour later, the checkpoint was sealed for all.

Confrontation and confusion over who could or could not cross the Delhi-Gurgaon border also led to sporadic violence last month after Gurgaon cops stopped people living in Delhi's Salahpur Kheda area from entering on foot or cycles to work in re-opened industries and commercial establishments.

Haryana's move to green-light inter-state traffic came two days after it issued orders to "completely seal" all borders with Delhi except for essential services. "The main reason behind spike in cases is entry of people from Delhi into areas of Haryana which share border with Delhi," minister Anil Vij said.

Re-opening of borders to non-essential inter-state travel comes amid a surge in COVID-19 cases across the country. India is the seventh most-affected country with over 1.9 lakh cases; there were 8,392 new cases in 24 hours, Health Ministry data showed this morning.

"Those In Skull Caps...": Yogi Adityanath's Deputy On UP Law And Order