The vaccination drive was opened to all adults on May 1, even as several states continued to flag vaccine shortage. 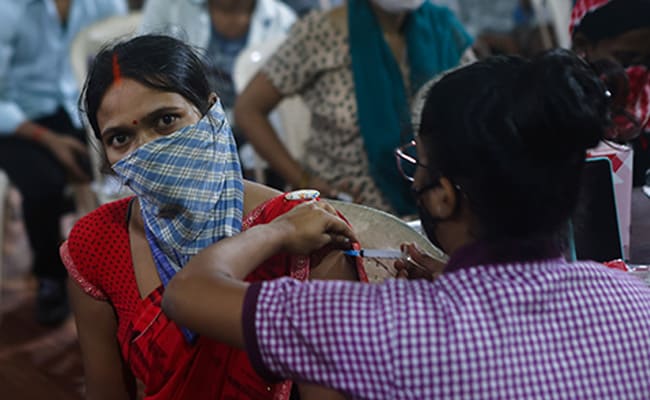 India began its vaccination drive in a phased manner, starting with health workers.

India on Thursday reached the milestone of one billion or 100 crore Covid shots administered in the country, the second after China to do so. India reached the landmark in 278 days, having begun the vaccination drive on January 16.

So far, over 70 crore people have received at least one dose of the COVID-19 vaccine, while over 29 crore people are fully vaccinated with both doses. The Narendra Modi government has been reiterating that all of India's adult population - around 94 crores - will vaccinated against Covid by December.

India began its vaccination drive in a phased manner, starting with health workers. Frontline workers - paramilitary forces, police, civic workers among others - became eligible for the vaccine from February 2. By February 28, India had administered over 1.4 crore doses.

Vaccinations were expanded to people above the age of 60 and those over 45 with co-morbidities in March. Prime Minister Narendra Modi became the first beneficiary under the new category, when he took his vaccine at Delhi's AIIMS. Several top politicians followed. 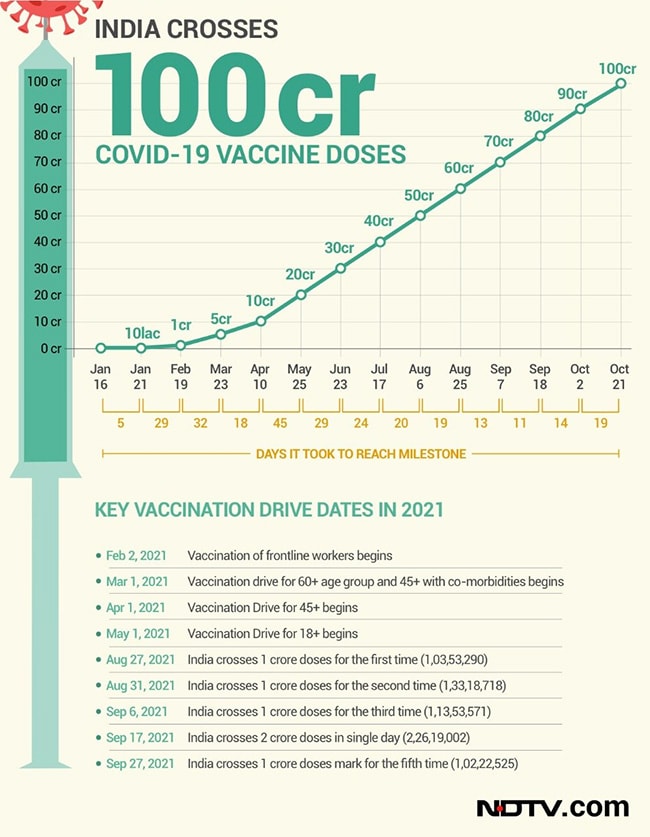 This phase of the vaccination drive coincided with the start of the second wave of COVID-19, which saw daily cases crossing the four-lakh mark on several days and more daily deaths than in the first wave of the pandemic. A month later, the Centre opened the vaccination drive to all above the age of 45.

Amid reports of vaccine shortage across the country, India also halted exports of vaccines under its 'vaccine maitri' programme in April. By April 30, the day when India recorded over four lakh cases for the first time, India had administered over 15 crore doses of the vaccine.

The vaccination drive was opened to all adults on May 1, even as several states continued to flag vaccine shortage. In a parallel but significant development, the Centre on May 13 approved increasing the gap between two Covishield doses from 6-8 weeks to 12-16 weeks. Earlier in March, the Centre had written to states and Union Territories to increase the Covishield dosage gap from 28 days to six-to-eight weeks for better results.

The Centre on June 7 announced that it would take over the vaccination drive from states and provide free vaccines to everyone, starting June 21. Meanwhile, India crossed 20 crore vaccine doses on May 25, taking 45 days to add 10 crore doses. However, India added the next 10 crore doses in just 29 days, crossing the 30 crore-mark on June 23.

By the morning of August 7, India had administered over 50 crore Covid-19 doses. It took just 44 days to add 20 crore doses to the national tally. Data also suggests that September was the best month for India's vaccination drive. On PM Modi's birthday on September 17, the government aimed for a record and registered 2.5 crore vaccinations in a day, the highest ever.