Women Health Workers Strike: Losing the ASHAs would not only threaten India's virus-containment effort, but also impact the other essential health services they provide to rural households that range from child vaccinations to tuberculosis control.

The ASHAs' frustration is more evidence of government's inability to fully control the epidemic,

They helped eradicate polio in India and reduced the number of women dying during child birth. But the country's catastrophic coronavirus outbreak, now the third-largest in the world, has pushed its all-female army of contact-tracing health workers to breaking point.

After months of harassment, underpayment and lack of protection from infection, about 600,000 of the country's one million Accredited Social Health Activists -- or ASHAs, which also means hope in Hindi -- are going on strike for two days starting Aug. 7 to draw attention to their plight. Union leaders expect more may join as the word spreads.

They want better and timely pay, and a legal status that ensures minimum wages, to sustain their work of helping Indian officials track down high-risk contacts of Covid-19 patients across slums and hard-to-reach rural parts of the country.

Losing the ASHAs would not only threaten India's virus-containment effort, but also impact the other essential health services they provide to rural households that range from child vaccinations to tuberculosis control.

"For working from 7 a.m. to 5 p.m. we get only 2,000 rupees ($27) a month and no masks or sanitizer," said Sulochana Rajendra Sabde, a 45-year-old ASHA in the Jalgaon district of Maharashtra, a state along India's west cost with Mumbai as its capital.

Sabde is yet to be paid the extra 2,000 rupees per month promised for virus-related work by the state government. "We have to maintain so many documents for a measly sum which is also never on time," she said. "The government has no place for us in its heart."

The ASHAs' frustration is more evidence of the Indian government's inability to fully control the epidemic, which has infected over 1.9 million including the Home Minister and Bollywood's biggest star. Despite a nationwide lockdown at the end of March that caused economic devastation, India's outbreak has accelerated nationwide, overwhelming its ramshackle health care system.

Saira Anwar Sheikh, an ASHA in the state of Maharashtra, was given masks and gloves but no protective wear. She died of Covid-19 on June 1, leaving her husband and four children behind. As many as 20 ASHAs have died in the outbreak, according to a local media report.

"She was the literate one among the two of us," said Anwar Sheikh Ahmad. "She gave 11 years of her life to this work and there's been no help from the government."

He has been unable to claim the insurance promised by the Narendra Modi-led government for frontline Covid-19 workers despite multiple visits to the relevant local agencies. 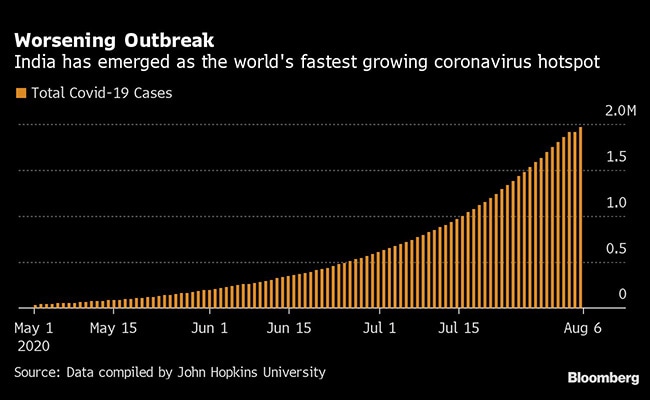 The experience of the more successful virus-mitigating countries, such as South Korea and Germany, shows that an effective and well-resourced army of contact tracers tracking down transmission chains has been a crucial advantage in curbing outbreaks.

But the speed at which the coronavirus spreads, often in hidden groups of asymptomatic carriers, has threatened to overwhelm those efforts even in developed countries like Japan.

India's ASHAs have always acted as a stopgap in the country's porous health care system, delivering assistance from maternal health to immunization in its vast rural hinterland.

Created under the National Rural Health Mission in 2005, they were meant to be a young, roving group of health care workers and are all female, as that means they typically are more welcome in rural homes. They work on an honorarium and performance-linked top ups, but the coronavirus outbreak means that many are now clocking 10 hours daily instead of the two to three originally envisioned.

The neglect of ASHAs' welfare is symptomatic of the disregard shown to disadvantaged segments of Indian society, said T. Sundararaman, the New Delhi-based global coordinator of the People's Health Movement.

"They are going to lower-caste households. They are reaching out to women. They are not going to the middle class or the Bollywood elite," he said. "The challenge is to bring attention to what is lost when these people go off the field."

Bloomberg spoke to eight ASHAs across four Indian states and discovered a common pattern of delayed wages and more recently, harassment in their communities as Covid-19 is stigmatized in India and people fear being taken away to quarantine centers.

"ASHAs are honorary volunteers and not considered workers under minimum wage law, even though they implement all the public health schemes," said Amarjeet Kaur, general secretary of the All India Trade Union Congress, which along with nine other trade unions, is mobilizing them for the two-day strike. 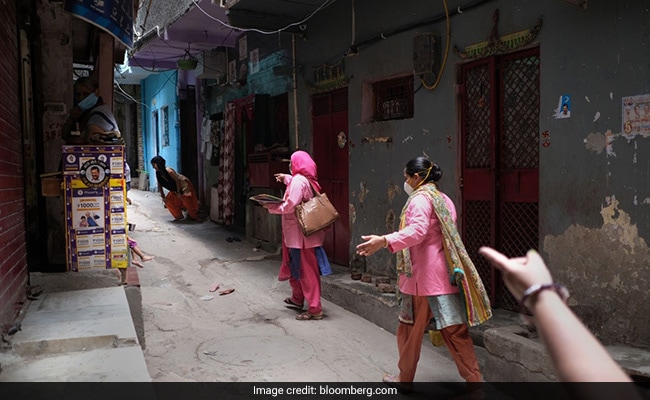 India's ASHAs have always acted as a stopgap in the country's porous health care system.

They have not heard back from the central government on their demands. Calls and an email to the health ministry seeking comments on the strike by ASHAs wasn't immediately answered.

Sabde remembers how she had to call the police after a man turned violent when she asked for his recent travel history. "People scream at me, curse me and pressure me not to give all the details" when she goes looking for people with a cold or fever, she said.

Balbir Kaur, an ASHA in the northern state of Punjab, has been buying gloves, masks and sanitizer herself after exhausting the government supplies she got in May. From visiting seven houses a day pre-pandemic, she now goes to 25 homes daily.

People heckle her saying they are packed off to quarantine centers because of her report on suspected patients to health department officials, Balbir Kaur said. Informing local officials about people entering and leaving villages -- part of their duties -- is seen as snitching, she said.

The union health ministry has been disbursing funds for ASHAs, including additional Covid-19 pay, said Vikas Sheel, joint secretary in the health ministry. There may be issues at the local level, he said.

A Maharashtra state government official, who didn't want to be named as he's not allowed to speak publicly, said the regular dues were being paid to ASHAs but that additional payment for Covid-19 services had not yet been officially cleared for disbursement.

"If they withdraw, then even routine services including immunization and tuberculosis control will be seriously affected," said Sundararaman. "They are trying to draw attention to the overall pressures they are under. It is not the two-day strike, it is the denial of their basic terms of services."

Although the ASHAs are hoping the strike will improve their circumstances, few can give up the job entirely amid a historic economic contraction, despite the risks.

"Our husbands have already lost their jobs due to the pandemic, so we can't afford to lose ours too," said Jeet Kaur, an ASHA in Ludhiana, Punjab. "How else will we feed ourselves and our children?"