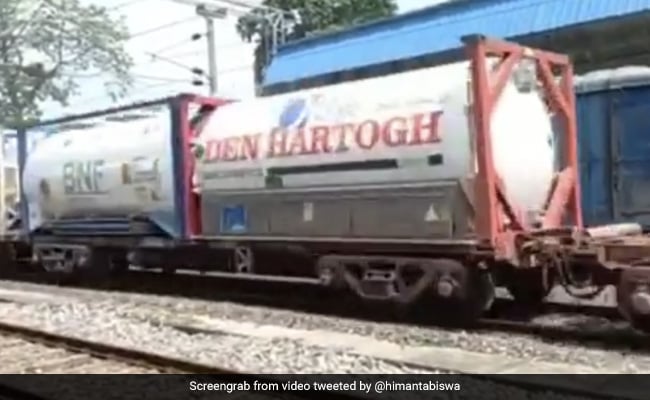 An Oxygen Express train pulls into a station in Assam

The Northeast Frontier Railway is ready to help state governments in every way possible in the fight against COVID-19. The NFR today ran a special train to supply liquid medical oxygen to Assam – the first such train in the north-east.

The Oxygen Express train which left Tata Nagar in Jharkhand on May 22 carrying four containers loaded with 80 tonnes of oxygen arrived in Assam's Amingaon on May 23.

This oxygen stock will be with Assam, but given to other north-east states when required, government officials said.

Assam Chief Minister Himanta Biswa Sarma along with the General Manager of NFR Anshul Gupta arrived at the Inland Container Depot in Amingaon to receive the first consignment of medical oxygen.

The Chief Minister thanked the centre for providing 80 tonnes of oxygen to the state and the railways for transporting them.

On behalf of people of Assam, I express our sincere gratitude to the GOI for sending 80 MT medical #Oxygen through #OxygenExpress.

This bolsters our confidence & our oxygen stock in a critical time. @PMOIndia@PiyushGoyalpic.twitter.com/gL9VubG5eK

The railway created a green corridor for the Oxygen Express to pass quickly. The train covered 630 km in just about nine hours from Malda to Amingaon with an average speed of over 70 kmph, which is more than the average speed of the Rajdhani Express trains.

The railways said it is continuing its journey of bringing relief by delivering medical oxygen to states. So far, the railways have delivered more than 15,284 tonnes in more than 936 tankers to states. 234 Oxygen Express trains have completed their journey.