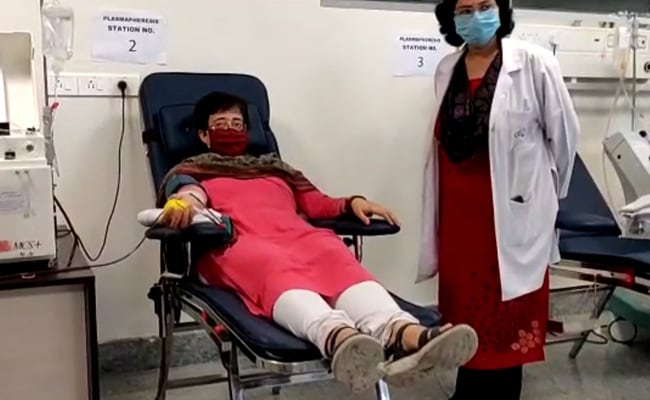 The Aam Aadmi Party-led Delhi government has opposed the possible removal of convalescent plasma therapy (CPT) from the national guideline on treatment of coronavirus. It has urged the central government to continue its use as a COVID-19 treatment for severely ill coronavirus patients.

"I am a living example (that plasma therapy works). Plasma therapy has saved my life. I would say this (discontinuation as Covid treatment) should not be done," said Delhi Health Minister Satyender Jain, who recovered from COVID-19 in June a week after he was given CPT.

"We have seen people benefit from it in Delhi. More than 2,000 people have been given CPT through plasma banks; some have even arranged for plasma on their own," Mr Jain said.

The AAP leader had made a similar statement last month after country's top medical research body, ICMR, released a report that said plasma therapy for COVID-19 neither reduces the death risk nor does it slow down the progression of the disease from mild to severe stage.

Mr Jain had argued in favour of plasma therapy saying it should be continued as it has no side effects, highlighting that there is a stage at which plasma therapy is effective. Doctors and experts, too, have maintained that plasma therapy is beneficial if administered at the right stage of the coronavirus disease's progression.

On Tuesday, Dr Balram Bhargava chief of ICMR, which is advising the government on pandemic management, said discussions on discontinuation of plasma therapy were almost at the final stage.

"The world's largest trial on plasma therapy was done in India on 464 patients in 39 hospitals with more than 350 authors. This paper has been accepted for inclusion in the British Medical Journal and it will soon appear as a full paper on the role of plasma therapy on COVID-19," he said.

Convalescent plasma therapy has been used as a line of treatment for severely ill coronavirus patients in many parts of the country, including Delhi, Maharashtra, Tamil Nadu and Odisha. The therapy especially gained popularity after Delhi minister Mr Jain and Deputy Chief Minister Manish Sisodia were given CPT after their COVID-19 symptoms became severe.

Later, the Health Ministry had issued a statement cautioning people against "routine use" of plasma therapy and anti-viral drug Remdesivir, stating that these are "investigational therapies" and should be adopted "rationally".