"Lockdown Not A Solution, Learn To Live With Covid": Delhi Health Minister

Authorities in Delhi reported 1,534 new cases on Frida night - the biggest single-day spike since 1,547 cases were reported on December 16 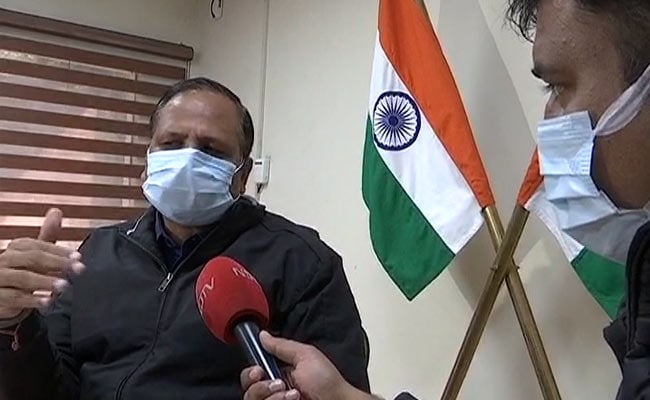 A second Covid lockdown in Delhi is "not a solution", Health Minister Satyendar Jain said today, after the national capital on Friday night reported over 1,500 new cases for a second straight day.

He referred to medical experts who've suggested the coronavirus - or a variant of the virus - will continue to circulate for years to come, and said "we'll have to learn to live with it", echoing comments made by Chief Minister Arvind Kejriwal in May last year.

"There is no possibility of a lockdown. Earlier there was a logic behind it. No one knew how the virus (would) spread. We were told if you close all activities for 21 days it will stop. So lockdown continued... but, despite this, the virus did not go away. I think lockdown is not a solution," he said.

"It is a recurring disease. Experts said from the beginning 'do not believe it will be finished immediately'. We will have to learn to live with it," he said, while also urging residents to get themselves vaccinated as soon as they become eligible.

Given experts' belief the virus is likely to remain active for the foreseeable future, Mr Jain also stressed on the need to follow rules - including using face masks and maintaining social distance.

"People wore masks for two or three months... then they stopped. This is wrong. We don't know how the virus behaves. I appeal to the people.. the more people who wear masks, the better the spread of the virus can be controlled," he said.

He also said vaccination times in the city had been extended - now from 9 am to 9 pm - and that a six-hour window - between 3 pm and 9 pm - would be open for those without appointments.

The third phase of the vaccine drive - in which all those over 45 can get the shot - begins April 1.

Delhi's caseload - second only to Maharashtra's at its peak - began falling last month. Almost exactly 30 days ago the city recorded just 256 new cases in a 24-hour period. Since then new cases have spiked, with authorities attributing this to people not following Covid-related guidelines.

Mr Jain said the Delhi government had taken steps to deal with the increase in cases, including ramping up testing and ensuring that there are enough beds available for Covid patients.

"At present there are enough beds; the occupancy rate now is 20 per cent. And if we have to increase the number of beds, then we will do it," he said, pointing to the Rajiv Gandhi Super Specialty Hospital and the LNHP Hospital as facilities that can be expanded.

"We have increased testing. 85,000 and 90,000 are being done daily... We are doing five times more than national average. Contact tracing for 30 people is done for each case," he added.

Responding to the spike in cases the Delhi government, earlier this week, ordered random Covid tests at the airport and railway and bus stations. Public celebrations of forthcoming festivals - like Holi, Shab-e-Barat and Navratri - have also been banned.

Mr Jain warned against breaking these laws, saying that local authorities had been given strict instructions to crack down on Holi in public. "Holi or other festivals will come again next year... If you want to celebrate in public, then celebrate next year," he urged.

This morning over 60,000 new cases were reported across the country - a 5.3 per cent increase over Friday and the biggest single-day jump October 16.