India went under a 21-day "total lockdown", starting Tuesday midnight, in an effort to stop the COVID-19 virus, which has infected nearly 600 and killed at least 10 people

Grocery and milk stores across the country have hit upon an innovative way to ensure social distancing as people queue up to buy and stock up on essential items during the lockdown initiated by Prime Minister Narendra Modi in an attempt to contain the novel coronavirus outbreak in the country.

Videos and photographs of shops in Gujarat and Puducherry, among other places, show the empty road outside - under the nationwide "total lockdown" only grocery shops, vegetable stores and pharmacies are allowed to function - marked with numbered squares or circles drawn in white paint.

Each is placed a few feet from the other and individuals can be seen carefully standing inside the marked space and patiently waiting for their turn to buy basic supplies.

"In Puducherry Milk booth social distancing.....," Kiran Bedi, the Lieutenant-Governor of Puducherry, commented on a photo showing five people standing inside equidistant circles drawn on the road outside a small milk booth.

Ms Bedi had earlier also shared photographs of a store from Gujarat's Patan district, showing people standing inside similarly-drawn circles in the road.

🙏🙏👏👏👇👇 👍
An example of Social distancing outside a grocery shop... pic.twitter.com/yODpyz0boc

A Twitter user shared a photograph of what is believed to a store in Punjab that has enforced similar rules, although this photograph could not be verified.

Videos have also been shared online of similar queues outside a store in Gujarat's Mundra district, where people line up in numbered squares under the watchful eye of a police officer.

India went under a 21-day "total lockdown", starting Tuesday midnight, in an effort to stop the spread of the contagious COVID-19 virus, which has infected nearly 600 and killed at least 10 people.

Under the lockdown, and curfew that has been imposed in several states, people have been prohibited from leaving their homes, except in an emergency, to minimise contact and stop the COVID-19 virus that spreads via droplets of bodily fluid when an infected person coughs or sneezes.

Prime Minister Modi, announcing the lockdown in his 8 pm address to the nation on Tuesday, said it was meant to "save India... its every citizen". He also said there was "absolutely no need to panic" as the centre and states were working to ensure an uninterrupted supply of essential items.

Enforcing social distancing, a measure advocated by the World Health Organisation (WHO) and repeatedly mentioned by the Prime Minister, has been a tricky proposition for the government, with thousands of people across the country, including political leaders, still gathering for various events. 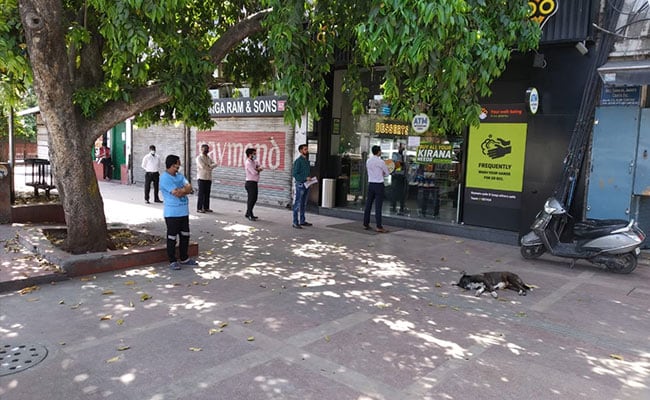 Social distancing outside a shop in Delhi's Connaught Place

Concern was raised, for example, over a high-profile dinner in Uttar Pradesh's Lucknow last week was attended by popular Bollywood singer Kanika Kapoor, who has said she is infected. Several senior politicians, including former Rajasthan Chief Minister Vasundhara Raje and Lok Sabha parliamentarians were at the event, with the trail of infection leading to President Ram Nath Kovind.

To help enforce social distancing, several states have banned such gatherings under Section 144, with the Prime Minister and various Chief Ministers appealing to people to stay at home.

Last week the Uttar Pradesh government said it would stop people living outside Ayodhya district from entering to celebrate Ram Navami; crowds of thousands are normal at this time. However, Chief Minister Yogi Adityanath did not ban the week-long event entirely.

Worldwide the virus, which originated in China's Wuhan district in December last year, has killed over 16,300 people and infected over 3.75 lakh others.