In moving visuals, a young man can be seen sitting on a plastic chair placed on the back of a green cycle-cart as it ploughs through knee-length standing water

Doctors at a COVID-19 care facility in Bihar's Supaul district have been forced to rely on cycle-carts to reach the medical centre, where coronavirus patients are receiving treatment, after heavy rains left surrounding roads waterlogged.

In moving visuals of their plight, a young man can be seen sitting passively on a plastic chair placed on the back of a green cycle-cart as it ploughs through knee-length standing water.

The medical centre, a run-down one-floor building, is seen in the background, opposite a small vacant plot overgrown with weeds.

"This has been the situation for the last two-three days. We can't leave our patients at this time. This is why we have to go to even if there are rains and floods," the young doctor, identified as Dr Amrendra Kumar, said.

Fortunately, Dr Kumar added, most of the COVID-19 patients were on the first floor and therefore safe from flood waters.

This is not the first problematic incident for the state's health department, which has also been criticised for low coronavirus testing rates. 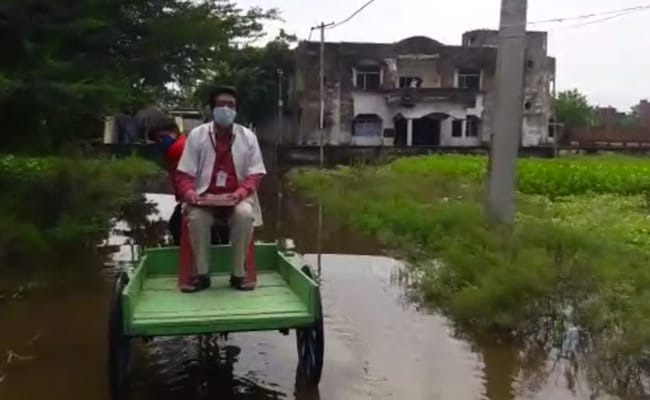 Heavy rain is forecast for parts of Bihar over the next five days, according to the IMD

Opposition leader Tejashwi Yadav has targeted Chief Minister Nitish Kumar on this issue, particularly since a COVID-19 test for Mr Kumar was swiftly arranged; the results came in two hours.

The Chief Minister was tested after the host of a programme he attended later tested positive. Mr Kumar tested negative, though a close relative staying with him had tested positive.

"The poor are dying. But instead of looking after them, these people are worried only about their chair," Mr Yadav, who is also the leader of the opposition in the Bihar assembly, said.

Bihar Deputy Chief Minister Sushil Kumar Modi defended the government's testing rate, saying last week that it had been scaled up to around 9,000 per day.

Bihar, which goes under a 16-day lockdown from Thursday to prevent further spread of the virus, has over 20,000 cases so far and a health infrastructure that is already starting to feel the strain. Over 170 deaths have been linked to the virus.

Over the last 24 hours, 1,320 new cases have been detected, including Bihar BJP President Sanjay Jaiswal and his family members.

And if the challenge of containing one of the most infectious viruses in recent times was not enough, the government must now also deal with the inevitable fallout of monsoon rains.

According to the IMD (India Meteorological Department), thunderstorms (accompanied by lightning and strong winds) are very likely over Bihar for the next five days - till July 19.

Heavy rains alerts have been advised across Bihar by the IMD for Saturday and Sunday.