The chief minister's outburst at Mr Kumawat came after Health Minister Mangal Pandey complained of non-cooperation from the officer. 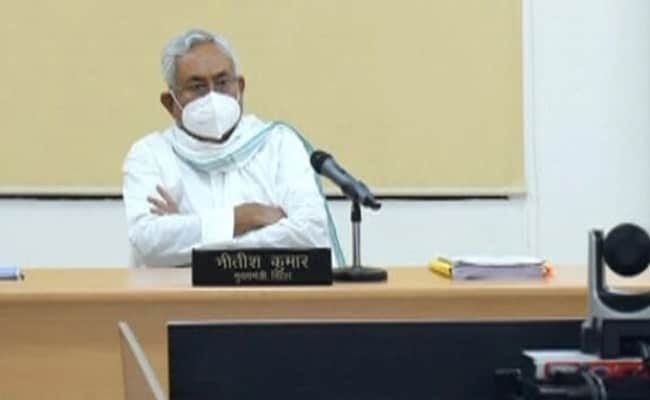 Nitish Kumar has been criticised by the Opposition over the poor handling of coronavirus pandemic.

Bihar Chief Minister Nitish Kumar - criticised by the Opposition over the poor handling of coronavirus pandemic -- lashed out at Principal Secretary Uday Singh Kumawat during a cabinet meeting on Saturday, sources told NDTV.

"Either you perform or we start action against you," Mr Kumar is learnt to have told the official.

The chief minister's outburst at Mr Kumawat came after Health Minister Mangal Pandey complained of non-cooperation from the officer. Mr Pandey, who was replying to Nitish Kumar's queries on low rate of testing, reportedly told him that his health commissioner does not listen to him.

It was at this point that the Chief Minister flared up and threatened the commisisoner to perform or be ready to face the action.

But sources say Nitish Kumar -- who has been reviewing the situation daily -- was trying to pin the blame on Mr Kumawat.

Leader of Opposition Tejasvi Yadav, who has led the attack on the chief minister over the handling of the pandemic, claimed that the Mr Kumar showdown was for optics to present a good image to the public ahead of the assembly elections. "Everyone knows Nitish Kumar just wants to conduct elections at a time when the state has slowed down testing and tracing and today everyone is paying the price," he said.

On Friday, the Patna High Court directed Bihar government to furnish details of steps it has taken to deal with Covid-19 pandemic getting worse in the state.

Besides, it also sought to know about number of isolation centres, facilities for patients, figures relating to availability of doctors and paramedical staff in the hospitals and also the number of ventilators and oxygen cylinders.

The bench also queried the state government on procedure being followed for disposal of dead bodies, count of patients suffering from COVID-19 and reasons for not admitting patients in the districts and referring them to Patna for treatment.

Bihar's COVID-19 tally reached 36,314 on Saturday with over 2,500 more people testing positive for the disease in a day, while 11 new fatalities took the number of deaths to 232, the state health department said.

Patna district has reported the maximum number of 36 deaths, followed by Bhagalpur 20, Gaya 14, Rohtas 12, Muzaffarpur 11, and Nalanda and Darbhanga 10 each.

Owner Of Delhi Building, Where 27 Killed In Fire, Arrested: 10 Points