India Coronavirus: 2.09 lakh new COVID-19 cases were reported in the past 24 hours (File)

Nearly 26 per cent of all people infected with COVID-19 in India since May 1 are in the 18-30 age group, government data released Wednesday evening revealed.

Vaccination for people in this age bracket - they became eligible this month as part of the 18-44 demographic - has run into a series of roadblocks over an acute shortage of doses.

The next highest infected age group is 31-40 years old.

Both these groups showed a tiny but steady decrease in percentage share of new cases this month.

Children and young adults - who some experts fear could be the target of the third wave, as the SARS-CoV2 virus mutates and evolves - accounted for fewer than 10 per cent of new cases in the same time, although the weekly numbers showed a steady increase. 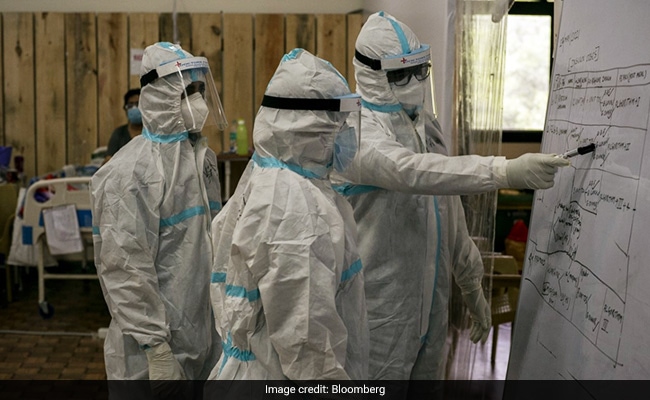 Dr Randeep Guleria, the chief of Delhi's prestigious AIIMS, has said there is no indication children will be severely, or more affected, in the third wave. However, some countries, including Singapore, have already begun reporting infections among the younger sections of their populations.

Infected individuals over 60 - the demographic considered most at-risk in the first wave - only accounted for 13 per cent (or less) of all new cases in the first 24 days of this month.

India has been battered by a devastating second wave of infections that has seen total deaths cross the three lakh mark and active cases hit a record high of nearly 40 lakh on May 14.

Since then there has been a steady decrease in daily new cases - this morning fewer than 2.09 lakh cases were recorded in the past 24 hours, as well as over 4,000 deaths.

While the decline is good news, experts have warned the government to prepare for the inevitable third wave - one that could destroy what remains of the country's healthcare systems.

Dr M Vidyasagar, a professor at IIT (Hyderabad) and a member of a centre-appointed panel, said it was critical to scale up vaccination and maintain Covid-appropriate behaviour (which needed to be reinforced this month with state-wide lockdowns) to ward off that third wave.

Vaccine shortage is a key issue in India's fight against the virus.

The lack of doses has forced states to look abroad but few foreign manufacturers are willing to deal with them. Government sources told PTI Tuesday Moderna could launch its single-dose vaccine next year. Pfizer - providing it has legal indemnity - could send five crore doses this year.

India currently has three vaccines - Covishield (developed by AstraZeneca-Oxford University), Covaxin (developed by Bharat Biotech) and Sputnik V, which has yet to be rolled out. All have waived indemnity.