Recovered prisoners say they wanted to be counted as members of society who want to do their bit and are keen to donate plasma.

Prison officials say the relationship between staff and prisoners has also improved during the pandemic.

As many as 1,043 prisoners and 302 jail staff have tested positive for the coronavirus in prisons across Maharashtra so far, according to the state prison department. But over 800 of them have recovered and 18 prisons now are free of COVID-19 cases, including the cramped Arthur Road Prison, one of the most over-crowded prisons in the country. The silver lining is now that inmates have signed up to donate plasma after recovering from the disease.

COVID-19 hit Mumbai's Arthur Road jail on May 2 and since then the number of cases slowly climbed to 182. Other prisons in the state that have reported high number of cases are the Yerwada Prison in Pune with 73 cases, Sangli District Prison with 144 cases, Nagpur Central Prison with 219 cases.

For Mumbai, the spread of COVID-19 in Arthur Road jail was a major worry as moving so many prisoners to hospital in the middle of a pandemic in a hotspot like Mumbai would become a logistical nightmare. Authorities decided to set up isolation centres within the prison and special diets were included to tackle the pandemic. Inspector General of Prisons, Deepak Pandey visited major jails in the area to counsel prisoners and even lived in some of the prisons to ensure that they were properly managed without loopholes. Inmates were given counselling and senior officers like Mr Pandey addressed them directly to allay their fears over COVID-19. The prison was also decongested by releasing some prisoners. Prisoners were segregated and given masks and sanitisers. 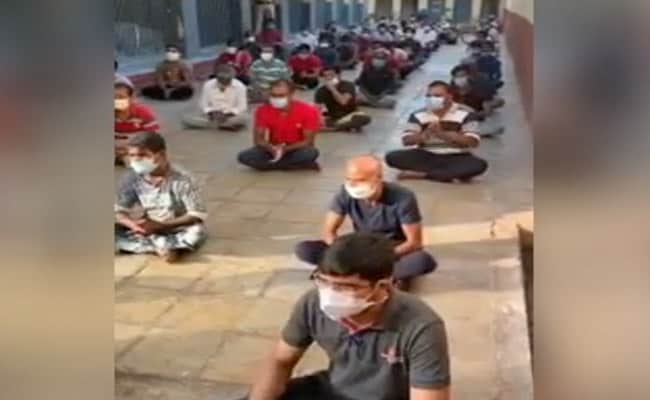 Prisoners were given masks and sanitisers to keep themselves safe.

Inspector General (Prisons) Deepak Pandey told NDTV, "As of today, we have zero Covid cases in Arthur Road jail which happens to be the most overcrowded jail in the entire country. Its official capacity is 840 and at one point of time we had 3,700 inmates. After decongesting, we have 1,800 inmates but still it was a tough task and we had a strategy of knowing the virus, chasing the virus and eliminating the virus."

Human rights activists are however demanding more transparency on the numbers and want the health department to sign off on the claims as they say very little information on treatment of COVID-19 patients among inmates. They add decongestion efforts also seem to have slowed down. They add the way prisons are structured in India, it is very difficult to ensure social distancing inside prisons. They add, no added funds have been allocated for tackling COVID-19 in prisons. They also believe there are several unreported cases as well.

Programme Head for the Prison Reforms Programme, of the Commonwealth Human Rights Initiative, Madhurima Dhanuka told NDTV, "I think every prison department across the country should be publishing these numbers on their websites. It's a right of the prisoners' families to know, it's a right of the prisoners' lawyers to know what the situation is inside. How many prisoners are being treated inside? How many are quarantined? How may are in isolation inside? How many were shifted to hospitals? I think it's very important for prisoners to be aware of this information because you cannot talk to them and cannot go and visit them at this time."

Recovered prisoners say they wanted to be counted as members of society who want to do their bit and are keen to donate plasma. Authorities say, they've seen many prisoners talk about their responsibility and stake in being an active part of society. Prison officials say the relationship between staff and prisoners have also improved as they had to fight the pandemic together. Officials say, the COVID-19 pandemic have led to many prisoners realising that they owe something to society.

"They themselves volunteered that they want to donate plasma and for that we are planning to conduct antibody tests and the antibody tests on the staff and not it will conducted on inmates and we will have a good number of plasma donors both among staff and inmates from Arthur Road Jail," Inspector General of Prisons, Deepak Pandey told NDTV.

Nearly 300 jail staff have also contracted the disease so far and nearly 270 of them have recovered.