Except the BJP, all political parties in Jammu and Kashmir have been demanding assembly elections after the revision of electoral rolls was completed and they were published last week. 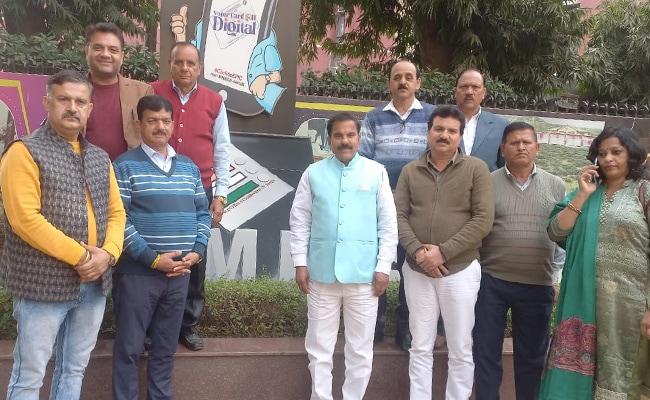 AAP said delaying elections on the pretext of delimitation was unjustified.

Arvind Kejriwal's Aam Aadmi Party has submitted a memorandum to the Election Commission demanding polls in Jammu and Kashmir without further delay. The region has been without an elected government for the last four-and-half-years -- its second longest period of Central rule since Independence.

Except the BJP, all political parties in Jammu and Kashmir have been demanding assembly elections after the revision of electoral rolls was completed and they were published last week.

"The Constitution continues to be subverted by taking freakish excuses to deny Democracy to the people of J&K. The rulings of Supreme Court on time-bound restoration of democratic governments in States/UTs continue to be violated with impunity by the present rulers," read the memorandum, which AAP submitted to the poll commission in New Delhi.

In the memorandum, AAP has quoted various Supreme Court rulings on holding Assembly Elections within a period of six months in states and Union Territories where the assembly is prematurely dissolved.

"It is now believed that the BJP may never allow elections in J&K as long as it remains in power. It is high time, therefore, that the ECI save the Constitution and democratic rights of the people of J&K," the memorandum read.

Early this month, J&K Apni party held a huge rally in Srinagar, pointing to the thousands who turned up at a cricket stadium in Srinagar demanding restoration of statehood and elections.

The National Conference has also demanded elections at the earliest. The party said there was no reason for delay following the publication of electoral rolls.

In June 2018, the BJP withdrew support to the People's Democratic Party-led coalition government in Jammu and Kashmir. Since then, J&K has been without an elected government.

In August 2019, Jammu and Kashmir was stripped of its statehood and the special status granted under the Constitution. It was divided into two union territories --- Ladakh and Jammu and Kashmir.

But elections have been delayed. A delimitation panel took more than two years to redraw the 90 assembly constituencies. Opposition parties alleged glaring discrepancies in the allotment of seats, saying population was not made the sole criteria to redraw the electoral map.

This, the opposition alleged, was gerrymandering to favour the BJP and an attempt to turn Jammu and Kashmir's demographic majority into a political minority in many areas.

AAP said delaying elections on the pretext of delimitation was unjustified.

"When the State of Andhra Pradesh was bifurcated and the state of Telangana created, no Delimitation was held and Assembly Elections were conducted immediately thereafter. It was then stated that no delimitation can take place in the country before first census after the year 2026 in view of constitutional Amendment effected by the then NDA government in 2001-2002," read the memorandum.

"In case of J&K however, the very same NDA adopted a different yardstick to delay and deny elections with a view to continue its proxy rule," it said.