Congress Will Not Ally With PDP "Now Or In Future": Ghulam Nabi Azad

The political circles in the Kashmir Valley were set abuzz after former chief minister Mehbooba Mufti arrived in Delhi on Friday night. 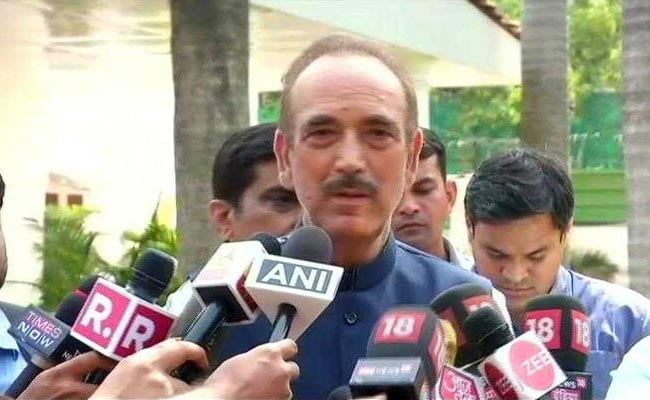 The Congress today ruled out any alliance with the PDP in Jammu and Kashmir for "now or in the future", denying reports in a section of the media on a possible tie-up between the two parties.

Asked to comment on the reports, Leader of the Opposition in the Rajya Sabha Ghulam Nabi Azad told PTI that there was no question of any alliance with the PDP, which lost power in the state after the BJP withdrew support from the coalition government.

"There is no question, for now or in the future, of forging an alliance with the PDP," Azad said here.

He denied having met any PDP leader.

The political circles in the Kashmir Valley were set abuzz after former chief minister Mehbooba Mufti arrived in Delhi on Friday night.

The PDP has 28 seats and the Congress has 12 in the 87-member state Assembly. A simple majority of 44 seats is required to form the government and some PDP members have been trying to seek the support of the CPI(M) and independent members.

However, Mr Azad's statement is expected to scuttle their efforts to form a new alliance in the state.

Mr Azad has called a meeting on Kashmir tomorrow to discuss the future strategy of the Congress in the state which will be followed by a two-day conclave in Srinagar that will be attended by party leaders from all the three regions -- Jammu, Ladakh and Kashmir.

The BJP had pulled out of the alliance government last month, forcing Mehbooba Mufti to resign as the chief minister.