Congress vs BJP As Jyotiraditya Scindia Returns To Gwalior, No Social Distancing

Social distancing, a must during the Covid pandemic, was missing as hundreds of Congress leaders and workers lined up to stage protests during Mr Scindia's visit 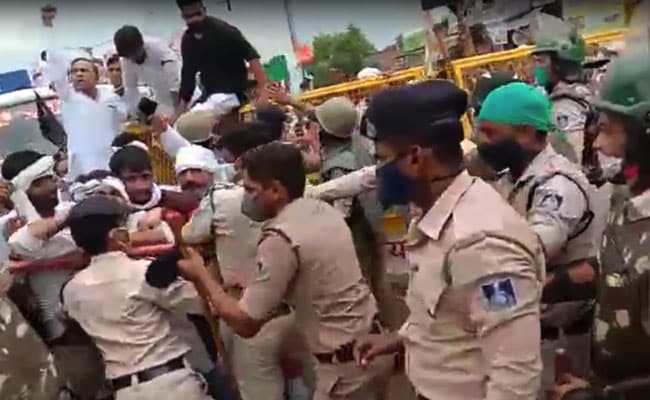 Former Union Minister Jyotiraditya Scindia's visit to Gwalior in Madhya Pradesh on Saturday - his first since he swapped the Congress for the BJP in March and triggered the fall of the Kamal Nath government - was meant to be a show of strength by the BJP - proof of the loyalty Mr Scindia still commands in his home turf.

While that loyalty was evident, Mr Scindia's visit also doubled as a show of strength for his former party.

Hundreds of Congress leaders and workers lined up to stage protests at three places in the city, as their former MP and other BJP leaders started a three-day membership drive in the Gwalior-Chambal region.

Neither show of strength, however, had any place, ironically, for social distancing - something repeatedly mentioned by Prime Minister Narendra Modi and top BJP leaders as a protective measure during the coronavirus pandemic.

Dozens of Congress leaders, including former minister Lakhan Singh Yadav were detained by local police while trying to black-flag Mr Scindia, whom they have dubbed a "traitor".

In visuals of the protest large numbers of Congress workers, several of whom don't even have face masks on, can be seen pushing and shoving face-masked police officers (some of whom are dressed in riot gear).

In other parts of the city, others from the Congress, including former BJP minister Balendu Shukla (who recently jumped back to the Congress from the BJP), also courted arrest. 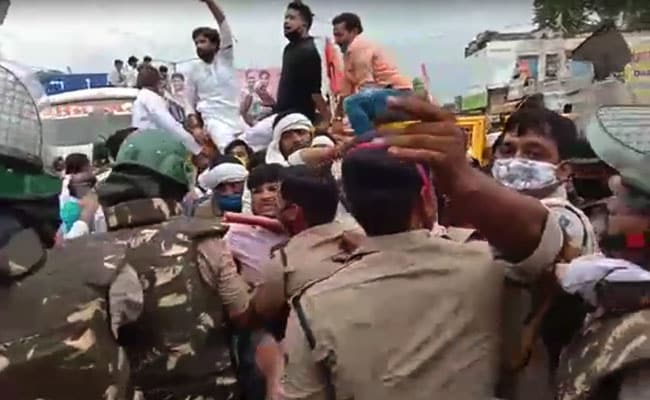 The drive also marked the start of the BJP campaign for by-polls to 27 Assembly seats, which are expected to be held in the coming months. 16 of these will take place in the Gwalior-Chambal region.

At the gathering the Chief Minister lashed out at the Congress for repeatedly calling Mr Scindia and his loyalists, some of whom accompanied him in crossing from the Congress to the BJP, as "gaddars (traitors)".

"If Jyotiraditya Scindia is a traitor for the Congress, then what were other stalwarts like Motilal Nehru and Netaji Subhash Chandra Bose?" Mr Chouhan asked.

The Chief Minister said that in 1923 Pandit Jawaharlal Nehru's father, Motilal Nehru, had quit the Congress and formed the Swaraj Party due to differences over contesting provincial and central legislative council elections.

Mr Scindia also hit out at the Congress, accusing former Chief Minister Kamal Nath of "turning the state secretariat into a centre of rampant corruption".

"Kamal Nathji was ahead of Modiji in imposing lockdown... while Modiji imposed lockdown to save people from the coronavirus, Kamal Nathji imposed it to prevent Madhya Pradesh people from entering the state secretariat in Bhopal, which turned into a centre of rampant corruption during the 15-month Congress regime," he declared.

"Let the Congress say whatever it likes, but the reality is that I quit the party and withdrew the support from the government to serve the people of the state," he added.

Over the next two days, Mr Scindia and the BJP leaders will travel to parts of the Gwalior-Chambal region to boost party membership ahead of Assembly by-polls.