The Congress' demand came two days after the Goa Lokayukta recommended an inquiry by the CBI against Manohar Parrikar's successor and BJP leader Laxmikant Parsekar into the matter. 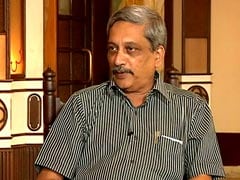 The Congress on Wednesday said it would approach the CBI for a probe into late Manohar Parrikar's alleged role as then chief minister in the "illegal" renewal of iron ore mining leases in 2014, which were later quashed by the supreme court in February 2018.

Hitting back, a senior state BJP functionary said the Congress is speaking without any application of mind.

The Congress' demand came two days after the Goa Lokayukta recommended an inquiry by the Central Bureau of Investigation (CBI) against Parrikar's successor and BJP leader Laxmikant Parsekar into the matter.

The Goa Lokayukta also recommended a CBI inquiry against then state mines secretary Pawan Kumar Sain and then director of Mines and Geology Prasanna Acharya.

"The Congress had filed a complaint with then governor and then director general of police in October 2018 on the issue, but no action was initiated," state Congress president Girish Chodankar told reporters in Margao.

He said the Congress had specifically named then Chief Minister Parrikar, who had succeeded Parsekar in March 2017 in another term, in the "mining lease scam".

"But within a fortnight of filing the complaint, then superintendent of police (crime branch) Karthik Kashyap had reverted saying no substance was found in the allegations during investigation," Mr Chodankar claimed.

The Congress' stand stood vindicated, he said referring to the Lokayukta's order.

"In the affidavit filed before the Lokayukta, Parsekar himself had said that the process to renew leases was started by Parrikar and he just continued it, as the government is a continuous process," Mr Chodankar said.

In the next seven days, the Congress will file a formal complaint with the CBI,seeking investigation in the "illegal" renewal of mining leases, he said.

The renewal of 88 mining leases was executed in the year 2014 when Parsekar became the CM in November 2014, after Parrikar was elevated to the Centre as defence minister.

The Supreme Court in February 2018 quashed the renewal of these leases, bringing to halt the mining industry.

Responding to the petition filed by NGO Green Foundation, Goa Lokayukta Justice PK Misra had passed an order observing that the institution is satisfied with the investigation.

The public functionaries concerned have committed criminal offence punishable under the Prevention of Corruption Act of 1988 and the Indian Penal Code, it stated.

When contacted, Parsekar on Wednesday said whatever decision he had taken in connection with the renewal of mining leases, was done in his capacity as the chief minister. "I have not taken any decision blindly. The High Court had cleared the renewal of the mining leases after which the government had formed a policy for it," he said.

The former CM recalled that the policy was put before the state Cabinet, notified in the government gazette before it was presented before the HC.

"The Supreme Court overruled the government's decision and quashed the mining leases. It happens in many cases that SC sets aside the decision of the state government, but this does not mean you can hang the chief minister holding him responsible for it," he said, while refusing to clarify if he had named Parrikar in the affidavit.

BJP state general secretary Narendra Sawaikar told news agency PTI that renewal of the mining leases was done within the framework of law.

"I am yet to see the Lokayukta report, but if the Congress wants to indict Parrikar then they are speaking without any application of mind. I don't know under which law they are talking of taking action against Parrikar," he said.