"Some leaders of the other political parties are asking how many terrorists were killed in the IAF strike. Today or tomorrow, it will be known," Home Minister Rajnath Singh said 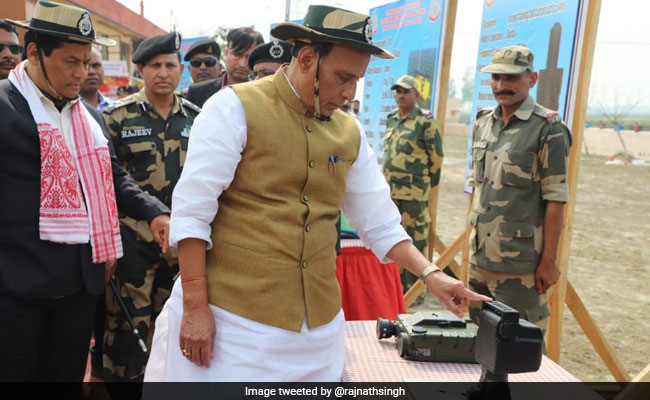 Home Minister Rajnath Singh today joined the debate over casualty figures of the air strike in Balakot. He said if Congress leaders were very keen on knowing the exact number of terrorists killed in the air strike, they should go to the neighbouring country and count it themselves.

"If my Congress friends feel that the numbers should be informed to them, then I would like to say that it you want to go to Pakistan, then go, count and ask people there that how many were killed by our Air Force," the Home Minister said after inaugurating a project of the Border Security Force in Assam's Dhubri.

The opposition parties have accused the government led by Prime Minister Narendra Modi of constantly calling attention to the air strike in BJP's election rallies, in the process politicising the aerial bombing on a Jaish-e-Mohammed camp in Pakistan in response to the suicide attack in Jammu and Kashmir's Pulwama that killed over 40 paramilitary soldiers.

"Some leaders of the other political parties are asking how many terrorists were killed in the IAF strike. Today or tomorrow, it will be known. Pakistan and their leaders know how many were killed," Mr Singh said, according to news agency PTI. "Should our Air Force go and count the bodies after the attack -- 1, 2, 3, 4, 5...? What is this joke?" he said.

The Home Minister took a dig at the Congress for "not believing" an assessment by the National Technical Research Organisation (NTRO) that said some 300 mobile phones were active at Balakot just before 12 Mirage 2000 of the IAF dropped laser-guided bombs on the terror camp. The NTRO is the country's top technical analysis and intelligence-gathering agency that can track and eavesdrop on communications.

Rajnath Singh's attack on the Congress comes a day after BJP chief Amit Shah at a public meeting in Ahmedabad claimed over 250 terrorists were killed in the Balakot air strike. On the day of the air strike, Foreign Secretary Vijay Gokhale had not given any casualty figures. The Air Force has also said it doesn't count casualties and is concerned only with the number of targets hit.

Two days ago, Uttar Pradesh Chief Minister Yogi Adityanath gave a large portion of his speech on the Balakot air strike at a BJP rally in Amethi - Congress chief Rahul Gandhi's constituency - where PM Modi and Ms Sitharaman announced a "defence corridor" to manufacture a modern derivative of the AK-47 assault rifle in collaboration with a Russian firm.